While I was in Tübingen, I was fortunate to catch the performance of Noel Coward's Private Lives, which was being produced by the Provisional Players, an amateur group that I guess is affiliated with the English Department.

Anyway, I remember watching a Noel Coward play and liking it; it was Present Laughter, and it was quite a comic show. This time, I guess I was also expecting something that would be funny, and my expectations turned out to be true.

See, the main gist of this play is that there is a couple, who was together for three years, and yet they got divorced and five years pass by. Apparently, they meet new people, get married, and go to their respective honeymoons, except that they end up in the same hotel. The troubles start there.

I guess the main conflict in the story is one of etiquette. How would you act if you are confronted by a quite embarrassing situation like that? Granted, the probabilities in which one will get divorced and remarry and go to a honeymoon in the same hotel where your former husband or wife was also having his or her honeymoon is rather low. I guess Noel Coward didn't have any knowledge of Bayesian statistics. However, should one allow one's disbelief to be suspended, and believe that the scenario was indeed plausible, then there are plenty of situations in which the "proper" thing to do was in fact in uncharted waters.

Regarding the production, it was I guess your typical poor man's theatre. The props and the set are minimal, but I guess given the background of the group, I wasn't expecting much. For their standard, and for the entrance fee that they were charging (5 EUR), the performance was rather superb.

I should also mention that they did a neat trick: the original play called for two heterosexual couples. In the production, they changed the old divorced couple to be a lesbian one. I guess it has been adapted to the current times. I thought that that was quite ingenious.

Overall, I enjoyed my time watching it. I never thought that I would watch theater, in Tübingen nonetheless. 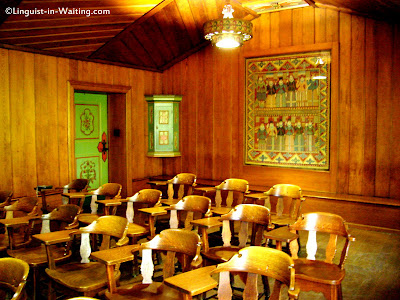 (Wooden Room, from my Cathedral of Learning Series)