So I recently watched Shame, when it was showing at the arthouse theater in town. My sister and I have been talking about this movie a few months ago, and so when it finally came to town, I figured I should watch it. It is a movie about a thirty-something man who lives in New York City, who is also a sex addict. His younger sister, who is also messed up in some form, moves in with him, and his life is turned upside down. The movie is about the drama that ensues. And yes, it is rated NC-17 by the MPAA.

I am not writing this blog to review the film. Granted, the film was quite impressive: I would give it 4 out of 5 stars. There is not much in terms of dialogue, the characters didn't talk much. Instead, it is up to the viewer to piece together the story, from the various visual vignettes that the movie is composed of. One slowly sees how messed up Brandon (the main character) is, through a juxtaposition of scenes showing his sexual habits. The same goes for Sissy (his younger sister).

What I find bizarre is that the MPAA gave this an NC-17 rating. This means that it is a rating more severe than R, and that people 17 years or younger cannot see it at all. Now that surprises me, because there are plenty of violent movies out there, and yet all they get is an R rating.

So what does this tell us? People are more favorable toward violence than sex? I was told that there are indeed more movies who are violent, and get an NC-17 rating, but then the director is willing to edit out some of the violence to get it down to an R rating. Does this mean that people are just peppering their movies with gratuitous violence, but it isn't really integral to the film?

Taking it out of the context of movies, I wonder, which one is more normal, to have sex, or to kill another person? Sometimes, I do not understand this country. There are awesome things about the USA, and yet there are also other parts which makes me think that this country is so Puritan that we're still living in the Victorian period. 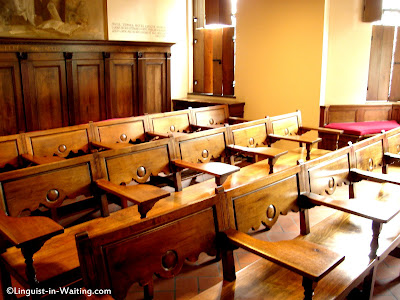 (Connected Chairs, from my Cathedral of Learning Series)