Stupidity and the American Reality Show

So, I've been watching The Amazing Race for quite a while now. In fact, I think I have been faithfully watching the show from Season 3 onward, and this time, Season 20 has been airing every Sunday. I do love the show, and yet I find it interesting that every season, there will be teams that just irritate me because of their stupidity, oozing from the television screen.

Take this season's contestants for example. There's the two guys from Kentucky, who seem to have a perennial ear infection that makes them have a hearing disorder, forcing them to talk loud to each other and to the other teams. Guys, you are just so obnoxious. Everyone doesn't need to hear what you are talking about. You're in public, after all. They remind me of the obnoxious travelers that I bump into whenever I am in an airport, as if their whole life is a show, wanting everyone to see it. I am fine with seeing some of it, but not all of it.

There's also the girl from the Team Big Brother. Just because she is a girl, does that mean that she has license to be weak? I hate her anti-female comments, telling her teammate to give her some leeway because she is just a girl. There was a task a while ago where one team member has to divide some numbers, and yet, she couldn't do it. She cried her heart out, just because she couldn't do long division. Oh gosh, how stupid can they be?

There are other teams that I find annoying, such as the Team Jersey Shore, although, I find them annoying more for their looks, than for what they do.

Anyway, I still find myself watching this show continuously. I guess it is because no matter how annoying the participants might be, I still find inspiration for future trips, seeing sights of things that I might want to go to later on. After all, if one has itchy feet, traveling is inevitable. I just have to endure watching the stupidity of some people on screen. And I guess I don't mind that. 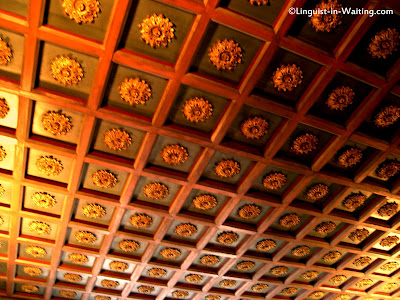 (Ceiling with Motifs, from my Cathedral of Learning Series)