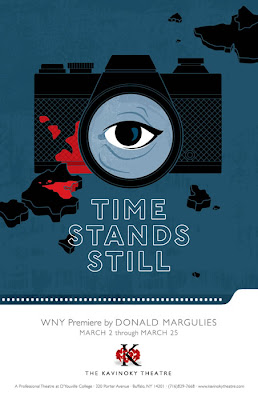 An injured photo-journalist, her foreign correspondent boyfriend, and the Iraq War: how do humans adapt to their emotionally skewed surroundings? This is the theme of this play written by Pulitzer Prize winner Donald Margulies. We were invited to watch the preview of the play before its actual run in the Kavinoky Theatre.

So the play involves just four characters: Sarah, who is a photographer, injured, and coming back from Iraq; Jamie, her long-time boyfriend, who is a journalist; Richard, who is a magazine editor, with working relationships with both Sarah and Jamie; and Mandy, Richard's very young girlfriend. The narrative spans a couple of years. Within that time span, Sarah recovers from her Iraq injury, and Richard and Mandy have a baby.

I actually loved the play, both for the content, and for the performance. I think the play did a great job in portraying human ambivalence: the characters had various beliefs that changed throughout the play, and that's how humans are, humans change. It also tackles the ethics of journalism, and the idea of capturing the moment, to a greater degree. In the beginning, Mandy was distraught at the war photos that Sarah took, telling her that instead of taking photographs, she should have went ahead and tried saving the people who died a few seconds after she snapped that photo. Sarah reasons that they were going to die no matter what she did; in short, they were meant to die there, and all she was doing was capturing the truth, not altering it. But in the second half of the play, it was Sarah who was having doubts with respect to the importance of her work, whether filming these atrocities and letting the world see it is in fact helpful at all or not.

The film is also about compatibility, when it comes to human relationships. Jamie wants to settle down and have a family, but Sarah, as much as she have tried, cannot imagine that idea. She wants the adrenaline rush, the adventure of being in the constant state of danger.

One final thought regarding the plot and characters is that somehow, I see myself in Sarah. I may not be a war photographer, but I love taking pictures, trying to capture the world as I see it. I also feel like I am in a constant state of movement. Right now, I am living in Buffalo, but I seriously do not see myself here a year from now. Where I am going to be, I do not know. People ask me if I feel like settling down and starting a family, but honestly, there isn't an inkling of a desire at this point. I'd rather travel and see the world, and fill my passport with entry stamps, taking photographs of the scenes I see along the way.

Regarding the performance, I am always floored in fascination with respect to this theatre company. No wonder they charge 36 USD: we attended the free preview, as we received invitations for the event, but it was quite professionally done. I am definitely impressed. The one thing I don't like was the seemingly overly dramatic performance of Jamie. Yes, there were emotional lines there, but I think he was over-acting the part at times.

That being said, I still enjoyed it. It was a great way to end a busy day. If you're in Buffalo at this time, it is running until tomorrow, in case you want to catch it. 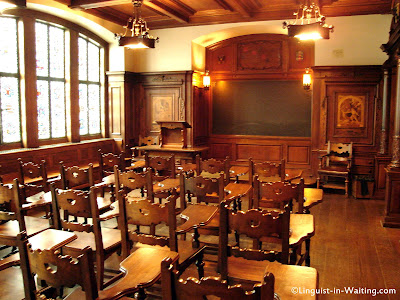 (Chairs with Holes, from my Cathedral of Learning Series)