As the US Presidential Election is getting close, I constantly hear stories from the news about the possible opponents, as the Republican Party is deciding who they will put as the opposing candidate. And sometimes, the views of the people who are in the running scare me. Seriously.

There's Mitt, Newt, and Rick. It's actually Rick, however, that scares the hell out of me a lot. I mean, there are larger fish to fry (the economy, for example), and yet all that comes out of his mouth is abortion and same-sex issues.

Take this article for example. He is characterized as someone with a deep and unwavering Catholic faith, and he thinks that America is on the road to cultural ruin due to secularism.

First, as much as I am an atheist, how does him being a Catholic affect people of other religions? The last time I checked, the USA is a multi-ethnic and multi-cultural country. I don't think someone who is bent on pushing one's own beliefs toward other people's throats is the best leader for this country.

And what's wrong with a university producing "The Vagina Monologues"? Santorum seems to be intent on pushing the USA back to the Puritan era, when there were Prohibition, witch hunts, and geocentric models of the solar system. I don't think I can handle that.

Most importantly, I don't think I can stomach a leader who cannot see the separation between religion and state as crucial. If he gets elected, then this will definitely influence my career path. I would definitely try my best to find an academic position that is far away from his government as possible.

So, now that Rick has decided to back out of the race, somehow I can breathe a little bit. Now let's see what Mitt does... 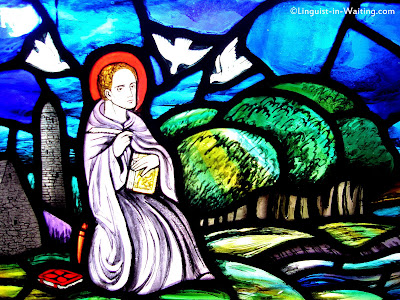 (Stained Glass Detail II, from my Cathedral of Learning Series)