I always take advantage of the great theatre scene in New York City every time I am there. Hence, when I was there last month, I opted to attend a play with my sister. This time, we watched Eternal Equinox that was showing in the 59E59 Theaters, written by Joyce Hokin Sachs.

This is a play that is rather minimalist in many ways, but at the same time, there's plenty of flourish as well. There are only three characters: Vanessa Bell, who is an artist and a member of the Bloomsbury Group, and sister to Virginia Woolf; Duncan Grant, a homosexual artist, and fellow member of the Bloomsbury Group; and George Mallory, a mountaineer who previously attempted to climb Mount Everest twice, "because it's there." The play happens in one night, when Mallory arrives at the house where Vanessa and Duncan live, asking Duncan whether he would want to accompany him to his third attempt in climbing Mount Everest.

So there's three characters, and a timeline that is less than 24 hours. Minimalist in that way, but in other aspects, this play packs a lot of punch. Plenty of tense and dense conversation and dialogue slowly lets the readers know of the history between the characters: for example, we learn that though Duncan is a homosexual and Vanessa isn't, they had a child together, named Angelica. Slowly yet surely, each character's feelings for each other is revealed, adding to the intricate emotional puzzle that this psychological thriller provides.

Regarding the acting, I don't think I have anything negative to say: each actor delivered superbly. The only minute thing I think I want to comment on was that I felt Hollis McCarthy's portrayal of her character was a little bit overdone. She was so much in character that I felt it was too artificial and melodramatic. That being said, I still had a great time.

Overall, I am glad we got tickets. My sister and I perhaps were the youngest members of the audience; everyone else were mature senior citizens. I liked the intimate setting of the theater: I am a big fan of black box theatres and given a play that is this intense, I don't think performing it in a big stage is appropriate. This play is meant to be enjoyed in a small intimate setting. 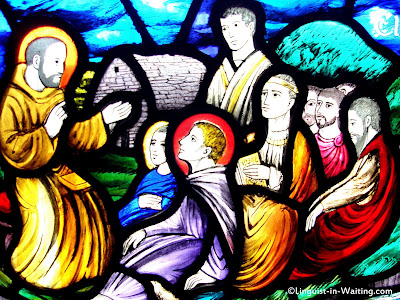 (Stained Glass Detail, from my Cathedral of Learning Series)