So yes, we did make a wrong turn. We accidentally entered a parking lot that was private. Soon enough, we realized our mistake, and started turning the car to go back out. But surprisingly enough, seconds later, a man came out, and started yelling at us.

See, it was snowing that night. It was also night time, and it was dark. We didn't see the sign. When we finally did, we didn't lose time in amending things. But what I don't get is this rudeness that I experienced from this idiot.

Man: Hey! You're not supposed to be here!

Man: Yeah, clearly. (referring to the car that was close by as we were backing up) You better have not hit that car.

All of this happened while he was shouting and I was just calm. Inside, I wanted to shout back, and tell this guy that I may have made a mistake, but I did nothing to deserve his rude behavior. I didn't, because he was a uniformed officer, and I am not even a citizen.

Which makes me think, what's with the rudeness? Is it because I am Asian and he is white? Is it because he's a border patrol (who is by default rude) and thus cannot act like a regular human being? That night, I tried rationalizing what happened, but my friends told me that I should accept the fact that people like that are not rational, and that I should just let it go. I don't know, he could have told me that I was not supposed to be there without making me feel like an idiot.

Perhaps he just needed some testosterone release, and needed to gratify the urge to exhibit one's dominance. It reminds me of a lion having the urge to roar. And here I am thinking that he should just put a sock on it. 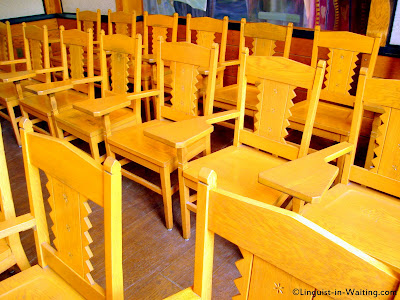 (Chairs, from my Cathedral of Learning Series)