So I have been watching The Amazing Race for quite a while now. And this season somehow is full of characters that just need a little shot of morphine.

First, what's up with all the communication breakdowns? The army husband and wife, and the Big Brother team, they are both so obnoxious to watch. The team members don't listen to each other. It's as if they are just two solo travelers, and not a team. The weird thing is that both of these teams are supposedly in a relationship with one another too, and if that is how they act all the time, I am pretty sure their relationship won't go anywhere.

But, that is what makes this show more interesting. I get to see interesting places while stupid Americans bitch to each other along the way.

The one thing that I am disappointed however, has something to do with the way they edit the show. Recently, they don't show the route. They even show the wrong thing.

For example, on the episode where they flew from Asuncion, Paraguay to Turin, Italy. They showed scenes where teams went to the Alitalia counter. It made it seem like it happened in Asuncion. But no, it didn't. First, Alitalia does not fly to Paraguay. Second, the interior of the airline they boarded was red, and had markings of TAM Airlines, a Brazilian airline. Next, the tarmac scene which had gazillions of Alitalia planes is more likely Rome, and not Asuncion. As someone who have more than the average knowledge of airline operations, these wrong portrayals of "reality" sometimes annoys me.

Oh well, I know that they did it so that they have a better storyline that would fit in 1 hour. Explaining that these events happened in several airports and not in just one airport is more of a hassle, but seriously, that is not reality. That is simply "reality". 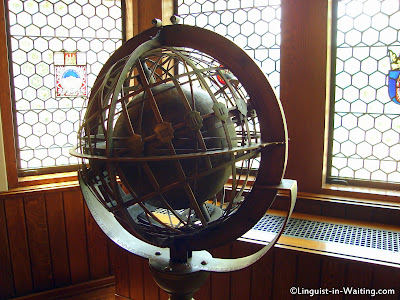 (Instruments, from my Cathedral of Learning Series)