About a month ago, I came across a blog article online, asking whether traveling abroad offers a more valuable experience than traveling domestically. And I did chip in my two cents on that matter in that article, but later on, I realized that it is a very complex question, and the answer will definitely be different for everybody.

First, I think the distinction between domestic and international travel is not warranted, as this blurs the distinction of size. The United States is a very big country, and one can cover large distances without crossing the border. There are other countries on the other hand, for example, San Marino, where "domestic travel" is very hard to conceptualize. So, in reformulating my answer, I think I have to factor in distance.

That being said, many people think that the concept of crossing an international border is more or less equivalent to getting out of one's comfort zone, where as long as one is inside one's borders, then one is technically still in one's comfort zone. I beg to differ. One can be outside of one's comfort zone without crossing the border. There is a cultural difference that one can feel between living in Buffalo and in New York City, for example, a distance of about just an hour away by plane. I personally feel that, just talking to my sister, who lives in the Big Apple. So, I don't think that it is easier to travel without crossing a border by default.

Sure, there is the hassle of getting passports and in other times, visas as well. That I agree, that can be a hassle. But I do think that the hassle is very much worth it.

Some commenters in that article I referenced mentioned that navigating foreign locales can be scary, that trying out new foods can be scary, or learning foreign languages can be scary. Well, what are you scared about? I speak 3 languages fluently, and know important phrases from 2 more. I do not fear getting a phrasebook and going to a place where I do not know the local language. The reality is, there are more multilingual people than monolinguals, and yes, monolingualism can be cured. A lot of other people have learned another language, so I don't see why it can be scary at all. All one needs is an open mind.

Don't get me wrong, I have been living here in the United States for more than 6 years now, and I would never pass an opportunity to do a road trip, but there are other places in the world that I would want to see as well, and most of them are outside the American border.

So I think it all boils down to getting out of one's comfort zone. One can travel and not get out of one's comfort zone, but so what? For me personally, travel is invaluable if I go somewhere, out of my comfort zone, whether it is domestic or not, and come back having learned something. It gives me an open mind. I lived in Japan and learned to bathe communally. I backpacked in Guatemala and appreciated the sound of women clapping their hands as they prepare tortillas. There are plenty of opportunities to see how other people do things their way out of one's comfort zone, and all of these are learning experiences for me. I do agree that one's comfort zone can correlate with one's country's border, but that is not always the case.

To conclude, I think traveling is awesome, but it is more awesome if one travels outside of one's comfort zone. It's not the domestic versus international distinction that is important here. Instead, it is whether one is willing to challenge oneself, conquer one's fears, and get out and see what's out there. The world is waiting for you. Go ahead and explore it. 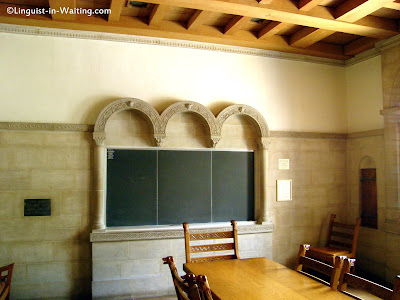 (Blackboard on Brick, from my Cathedral of Learning Series)