Well, let me tell you first that I have come under fire from two sides. Yes, there's two sides that have given me arguments. The Christians and the Muslims. Let's handle what I think was the easier one to handle first, the Muslims.

See, a while ago, I have read the Qur'an, and reviewed it, as I always do whenever I read a book. I have also published the same text in a book-based social networking site, where random people can see it as well, found here. Now, as you can see, there are plenty of people who try to convince me to "read it again, perhaps I might see the light."

The answer I give is that I thank the people for their concern, but no thank you, I think I am content with the light I have. At least, I do not have to buy into a whole set of assumptions first, before I see the light.

Now, speaking of assumptions, this is when it gets more interesting. A while ago, I published a rant entry about human cloning and scientific investigation. I expressed disappointment when scientific research is hampered by laws that are due to "principles" designed to implement Biblical viewpoints. My full rant can be found here.

Now, if you scroll down, you can see a conversation I have had with a certain "Anonymous". Yeah, he's anonymous. I have something to say about that later.

Anyway, I find it extremely funny how this anonymous being just wanted to bring up the topic of atheism, for the sake of a debate. First, he totally disregards the topic of my entry. If one reads correctly, I actually am fine with humans acting like gods and advancing scientific experimentation. Instead, he brings up Adam and Eve and the atheists.

But no, this anonymous person has some strange definitions of god. If you read the comments I have had going back and forth, I provided a rebuttal to his definition of god. Being an atheist does not mean one thinks one is independent. Just because I have free will and opt to exercise it does not mean that I am not dependent on other people. That is one assumption that is unwarranted.

But it seems that it is a semantic issue. If the definition of god is someone who decides what is right or wrong, then sure, I am a god. But I am sure that plenty of people will agree, that there are more requirements to being a god. A god is superhuman, all-powerful, all-knowing, and has plenty more capabilities than simply deciding what is right or wrong. In this broader definition, an atheist is not a god.

Another topic that has been raised is the idea that atheism is synonymous with anarchy. This stems from the wrong assumption that there should be a superhuman entity to regulate and tell humans how they should live their life. And since atheists do not believe in that superhuman entity, then it follows that there isn't any entity that tells humans how to live their life, and so anarchy is the result. This is wrong. Just because atheists do not recognize a superhuman entity to guide one's life, does not mean that atheists are not responsible for any of their actions. I have the ability to decide what is right and wrong. How do I determine that? Well, I deem right what I think is okay to be done to myself. I deem wrong what I think is not okay to be done to myself. I don't think I would like to be raped, so I don't go around raping people. Now, you might say that there is variation between the multitudes of people who exist here on earth. This is true, but standard statistics apply. There is a normal distribution, and there is the occasional outlier. Society then has standardized the way we treat these outliers: we call them deviants, we call them criminals, we call them abnormal, and we lock them up.

There are a bunch of other points that Anonymous and I have covered, primarily about the null hypothesis: Anonymous seem to start from the premise that there is a god, while I start from the opposite. However, in standard scientific methods of inquiry, one has to start from the simpler hypothesis. In this case, one starts from the simpler premise that there is no god, there is no effect. The burden of proof rests on the side that claims that an effect exists. In inferential statistics, it is always the case that the null hypothesis is that two sample means are equal, and the test is done to see whether it is indeed true or not.

Anyway, I wanted to expand on the final point I raised in this duel with Anonymous. I mentioned the idea that religion is pretty much a defense mechanism. Here's what I mean by this. Say you're in a sticky situation. You got fired from your job, your partner left you, the debt collector has been knocking on your door, and another loved one is very sick and accumulating hospital bills. Now, you're in a very pathetic situation. You start thinking back, what did you do to deserve all this?

But, maybe, it is not totally your fault. Maybe it was because there was some higher power messing up with you. Then it doesn't become your fault completely. You feel a little relieved, even though your problems are still there.

Here's another scenario. Say you're on a sinking boat, and you know that the water is creeping up on you inch by inch. You have nothing else you can do. But, you believe in a god you can pray to, you believe that if you pray, you can be heard, and hopefully, this god will remember you and take you to an afterlife that is better than the one you have right now. So it is okay if this current life is over soon. Because a better one awaits you.

See how religion can be a defense mechanism? If everything fails, there's the "Get a Better Life Afterlife" Card. Now I simply opted not to believe in that. I opted not to fool myself. It might sound grim, but seriously, I believe that this life is all I have. I have spent almost 30 years of it now, I don't know how much more I have left, but I can honestly say that if my life ends tomorrow, I think I am fine with that. I don't need to believe in an afterlife. Now it is true that I might be saying this because life so far has been fortunate enough that I don't need a defense mechanism. We'll see, but as they say, life isn't fair.

Anyway, I ended my discussion with Anonymous. As I said there, if he really wanted a calm debate, the least he could do was provide a name. But he didn't. I find it ridiculous that there is this person, somewhere in southern California, who goes to Google and searches for my full name and checks my blog to see if he can post another anonymous comment. Guess what, I have a tracker. I know your IP address.

So, to conclude, what have I learned from this? Well, I have to say that putting my beliefs to the test actually strengthens my beliefs. It reminds me of my past. When I was still a member of an organized religion, we were told that we shouldn't read material that was published by other religions, as the reasoning was that it would corrupt our minds. But if you do that, then you're pretty much like the characters in Plato's allegory of the cave, who have created a reality for themselves by fooling themselves that outside opinions do not exist at all. How can you test the strength of your beliefs if you don't weigh it against outside forces? Car manufacturers conduct thousands of crash tests to determine the durability of their cars. I think the same principle should apply to one's beliefs. 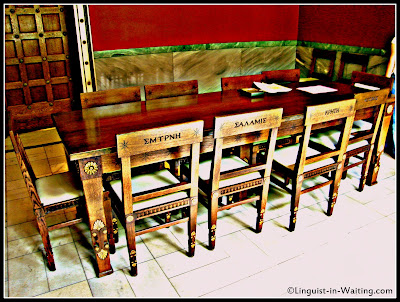 (The Greek Seminar Room, from my Cathedral of Learning Series)