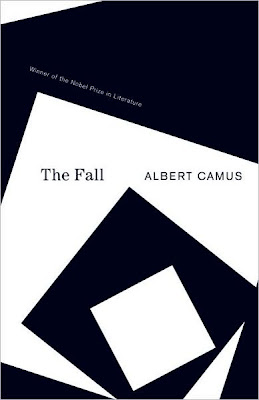 An edited version of this article was first published as Book Review: The Fall by Albert Camus on Blogcritics.org.

Can a person really be faultless? According to Albert Camus, the answer is no, but that is okay.

The Fall is perhaps Camus' most enigmatic novel. It tells the story of Jean-Baptiste Clamence, a judge residing in Amsterdam. He tells his story through a series of monologues directed at a stranger - that is, the reader - starting from a seedy sailor's bar in Amsterdam, called "Mexico City". At first, he is the perfect and blameless character: he was a respected Parisian lawyer, he is a champion of noble causes, and overall, he can be said to be a good man. However, as the novel progresses, his blemishes slowly appear, one by one.

In the end, we see Jean-Baptiste Clamence, a totally different human being, admitting his errors and mistakes, but argues that he cannot be held culpable for them, because other people are not flawless and without blemish either.

Clocking in just under 150 pages, The Fall is one of the densest novels I have ever read. This is a philosophical novel: the narrative's goal is not to describe a particular sequence of events forming a coherent whole. Rather, its goal is to explore and flesh out a certain philosophy or idea to the reader. In this case, this novel explores the themes of innocence, non-existence, and truth.

One feature that I especially liked was the fact that this novel is written from the perspective of the second person, yet used a first person present tense. In this way, the reader becomes a character in the novel, and Jean-Baptiste Clamence is directly speaking to the reader. I believe that this was rather a neat trick in Camus' part: this way, the reader cannot be an innocent and detached bystander. Instead, the reader is forced into the discussion, and has no choice but to personally reflect on the issues at hand.

Another feature of this novel that I found ingenious has something to do with its symbolism. It is set in Amsterdam, which is a city below sea level. Amsterdam also has the geographic feature of having concentric canals that radiate from the city center. Now, given these facts, it is the perfect geographic imagery to provide the setting of this story. After all, if one will write a novel about a man, who originally was installed in a social pedestal as an accomplished Parisian lawyer, but who fell into disgrace and descended into the deepest depths of Hell, then what better city to symbolize his location than the dead center of Amsterdam? The setting thus is a physical and metaphorical illustration of Jean-Baptiste Clamence's fall from the elevated society of Paris, to where he is right now.

I have to admit, that as much as the novel is short and concise, this is also one of the most complex books, and I do not profess total understanding of the material. However, beneath the thick shell, I can see a glimpse of genius here, that I agree with the philosopher Jean-Paul Sartre's description of The Fall as "perhaps the most beautiful and the least understood" of Camus' books. Because seriously, it takes a genius to explore a philosophical thesis such as existentialism in less than 150 pages.

In short, this is something I recommend for people who are up for a literary challenge. This is not a simple airport novel. This is not a page turner. The Fall will engage you, and will make you think even after you finish reading the last sentence. It is a brilliant study on the human condition. I give it 4 out of 5 stars. 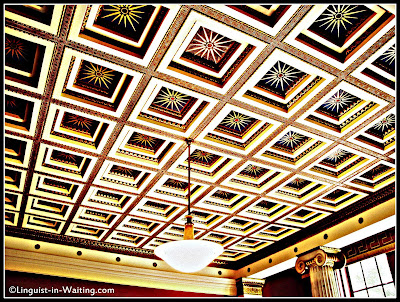 (The Greek Ceiling, from my Cathedral of Learning Series)