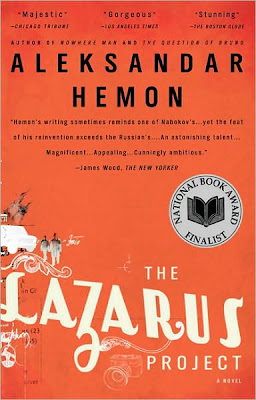 An edited version of this article was first published as Book Review: The Lazarus Project by Aleksandar Hemon on Blogcritics.org.

Two immigrants in two parallel situations, yet separated by a hundred years. This is the story of Lazarus Averbuch, a Moldovan immigrant to the United States, who was killed by the Chicago police in 1908; as well as the story of Vladimir Brik, a Bosnian immigrant to the United States, who decides to write a book about Lazarus in 2004. This novel has two parallel storylines, one embedded within another, and bizarrely enough, the narrative feels like it moves backward more than forward. But before the critique, let me give a little synopsis.

The novel begins by narrating the incident surrounding the death of Lazarus Averbuch. Lazarus Averbuch was a real-life character; he was a Jew who survived the Kishinev pogrom in 1905 in what is now Moldova. He, together with his sister Olga, immigrated to the United States, and found their way to Chicago. Sadly, however, in 1908, Averbuch was killed by the Chicago police, simply because he was in the wrong place at the wrong time. And as with the case of shall we say xenophobic populations, Averbuch was the victim of profiling and stereotyping: the book makes it quite clear how the police investigation surrounding his death was basically a farce, a cover-up for the trigger-happy personnel of the Chicago police.

In parallel, the novel also narrates the story of Vladimir Brik, a Bosnian immigrant who was fortunate to leave Sarajevo before the siege of 1995. He ends up in Chicago, marrying a neurosurgeon named Mary. He does not have a stable income, and he feels guilty at the fact that Mary earns more money than him, and that he simply bums around while his wife goes ahead saving lives. He is trying to be a writer, and decides that he would write about Lazarus Averbuch. He bumps into some members of a rather rich society, and secures some funding to do research. With the money he gets, he travels to Ukraine, Moldova, Romania and Bosnia, trying to dig up Averbuch's history, while at the same time trying to reconnect with his forgotten past.

And thus the novel begins.

As The Lazarus Project progresses, we learn more about both Lazarus and Vladimir. Lazarus' sister, Olga, is constantly bullied by the police in an attempt to rationalize their actions: the events that happen after the death are narrated in great detail. Little by little, the novel paints a picture of a corrupt Chicago police force, and how immigrants and minorities are discriminated against. And one hundred years later, we learn more about Vladimir and his past, slowly being uncovered, as he travels through Eastern Europe, in his own attempt to uncover Lazarus' history.

I especially liked the parallelism between the two characters: Lazarus escaped Moldova and immigrated to Chicago, but "The Promised Land" failed to materialize. He got work in a deplorable egg factory, and he gets killed by some corrupt policemen. Vladimir on the other hand escaped Bosnia and immigrated to Chicago as well, and didn't get a successful outcome either. Sure, he got married to a successful neurosurgeon, but he is still underemployed, and overall, unhappy. The difference, however, is that for Vladimir, he has the potential for change, and the novel alludes to that. His purpose for going to Eastern Europe was in order to research for his book, as well as closure with regards to his past. The novel ends on a good note, suggesting change and progress.

One other aspect of this book that I liked is its stab at the social inequalities and social injustice that we all face. In both generations, the character belonged to a minority, and they faced various forms of social injustice. Whether it is xenophobia, or genocide, the character was forced to fend for himself, one way or another. All of this was portrayed, in a tragicomedic form, that at times found me laughing, and at times making me ponder on my own experiences as a foreigner living in a country that is not my own.

Finally, a short comment regarding the multiple storyline narrative. Perhaps it is a coincidence that this is the second book I have read featuring multiple storylines about immigrants. I read How to Read the Air by Dinaw Mengestu one year ago, featuring multiple storylines about immigrants from Ethiopia and how they navigated immigrant life here in the United States. Perhaps this narrative format is well-adapted to this topic, as the author can show time-traversing parallelisms across different characters and generations. It might be a little taxing to the brain, as the reader is forced to shift back and forth from the two narratives, but overall, it creates a great big picture of the novel's topic.

Overall, I liked The Lazarus Project. I didn't have any expectations going into this book, but I emerged out of it liking it more than I expected. I give it 4 out of 5 stars. 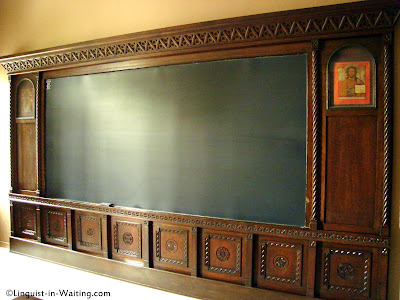 (Polished Blackboard, from my Cathedral of Learning Series)