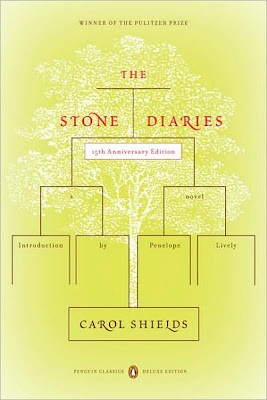 An edited version of this article was first published as Book Review: The Stone Diaries by Carol Shields on Blogcritics.org.

This book is the story of Daisy Goodwill Flett, a rather ordinary woman, whose life was surrounded by loss and grief in every aspects. As she goes through her life's various stages, she struggles to find her purpose.

It starts with the narration about the circumstances surrounding her parents: how they grew up, how they met, and how she was conceived. She is born in 1905, and her mother dies in childbirth. As every chapter progresses, we see further developments in Daisy's life. She becomes a toddler, she then is raised by her father after a brief absence, she goes to school, gets married, becomes a widow and gets married again, runs a successful newspaper column, falls into depression, and finally, she ages and dies. The book covers about 90 years of personal history, all revolving around Daisy Goodwill Flett, but provides a glimpse of the lives of all her relatives.

Fortunately, the book is accompanied by a genealogy tree. Thus, it was easy to follow along when characters would suddenly appear, due to the fact that the chapters are separated by years, and time does not progress in a linear fashion in this book. One chapter would be following a chapter located 10 years before, for example. Hence, characters appear in medias res, so to speak.

Given the structure of the narrative, I don't think I have anything great to say. How should I say it, I am ambivalent with this book. I don't like it, but I don't hate it either. "Okay" might be the most accurate rating, and here's why.

First, I fail to see an active plot in this book. What makes the book move forward? Is there some sort of conflict that the book is trying to explore? I don't see any. As far as I can tell, the book is simply following the life of Daisy, who is in no way extraordinary. For all we know, the author chose Daisy randomly. In other words, I fail to see why this book is interesting.

Second, I despised the lack of consistency with respect to the narrative style. It starts as a first-person narrative, narrated presumably by Daisy, but it shifts in between, and transitions into a third-person omniscient. And in between, it turns into an epistolary novel, where the narrative consists of letters, phone calls, messages, and notes written by the various characters to each other. This goulash of narrative styles worked against the novel, in my opinion, as the lack of consistency created more confusion in the reader's part than cohesion.

That being said, I was tremendously surprised to learn that this novel won both the Pulitzer Prize and the Governor General's Award in the United States and Canada, respectively. Is there something that I am not seeing? Is this book such a superb description of the quotidian that it becomes a master oeuvre? I might be just a naive reader, but unfortunately, I am not seeing it.

I am giving The Stone Diaries 3 out of 5 stars. It wasn't bad, but it wasn't good either. It was just an ordinary novel about being ordinary. 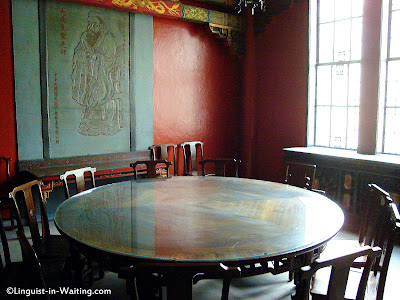 (The Chinese Round Table, from my Cathedral of Learning Series)