The other day, I received tickets to attend a performance of the Buffalo Philharmonic Orchestra. It was perfect, as I was having a productive streak, and I needed a little break. It turned out that they were playing some pieces that I wasn't well acquainted to.

First, they played Fang Kejie's Tibet Dance. This is a contemporary piece, and it was a spectacular display of what an orchestra can do. The rhythm was superb, and it explored many different timbres and sounds. It was a musically exciting piece.

Next, they performed Camille Saint-Saëns' Piano Concerto No. 2 in G minor. I know this piece, but haven't seen it performed live. I was quite impressed with the pianist. However, I felt like the pianist and the conductor were not on the same wavelength. I think it was the conductor's fault: it was quite unclear what beat he was conducting, as his arms simply seemed to draw circles instead of properly delineating beats. There were chords in the first movement where the piano and the orchestra needed to come together. However, they were off by a few milliseconds. That being said, by the third movement, the pianist was able to adopt to the conductor, that it was fine.

After the intermission, they played Alexander Borodin's Symphony No. 2 in B minor. I was not familiar with this piece, and frankly, it wasn't too captivating. It didn't have the oomph that the first two pieces had. The first movement seemed like an etude in unison. Anyway, I have nothing good to write home about this piece. I should make it clear, however, that the orchestra did a great job in performing this piece, and this is more a critique of the music.

Given that, I wished they had ordered the program differently. It would have been great if they started with the Borodin symphony, then the piano concerto, and ended with the Tibet Dance, as that would have been a great finale. Oh well, that being said, I still enjoyed it. 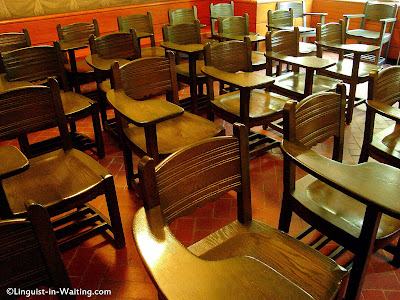 (Even More Chairs, from my Cathedral of Learning Series)