Chichi-what? Yeah, town names in Guatemala seem to have a tendency to be long. There's this area where every town seems to end in -tenango. Quetzaltenango, Chimaltenango, Chichicastenango, Momotenango, and so on. Anyway, I decided to head to Chichicastenango because it is a Saturday, so if I get there that day, I will be there in time for the huge Sunday market. Hence, in order to go there, I took a chicken bus from Antigua to Chimaltenango. Then, I had to transfer and take another chicken bus from there, until I reached the town.

Upon reaching the town, nothing much was happening, since it was still a Saturday. I just bummed around, checked out the town, and had lunch. I also checked out the churches, which, I would learn later, is a very different experience from what I was used to, and to what I expected. 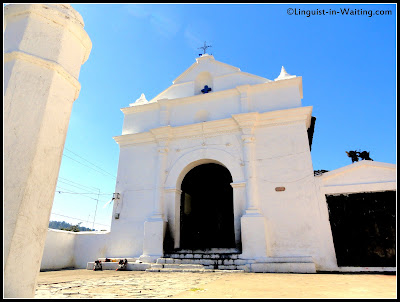 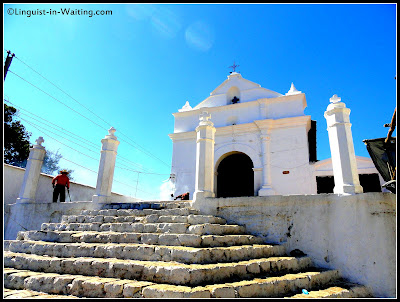 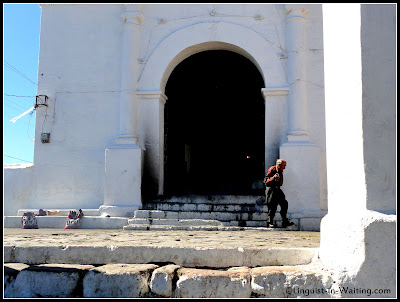 This is one of the two churches in town. This is the smaller one, but the bigger one is of a similar design. Chichicastenango is the only place where you cannot take pictures inside the church, I think. And here is when I saw strange Christian and Mayan interwoven practices. If you notice, the doorposts of this church is blackened, and that is due to the incense that Mayan priests burn next to them. You can see this old man whipping a censer back and forth, emitting an interesting smell. It was a little hard getting used to it. 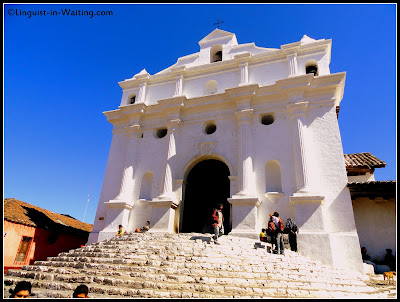 This is the Church of Santo Tomas. This is a prime example of how Mayan and Christian beliefs mix. This 400-year old church sits on a Pre-Columbian foundation, and the 18 steps that lead to its entrance symbolizes each of the months of the Mayan calendar year. Mayan priests venerate the staircase, and one can see drippings of wax due to the numerous candles that people burn on them. The picture above was taken on a Saturday, when there aren't many people yet. Remember this picture, because the pictures I have taken on Sunday show a very different picture. 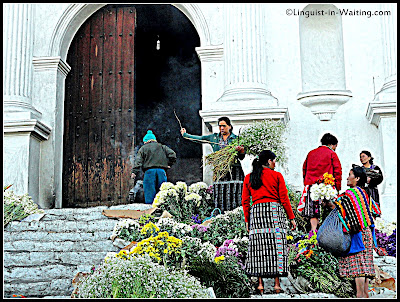 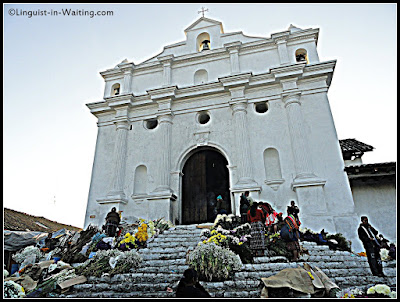 Now, one day later, and the scene is different. As you can see, the staircase is now filled with flowers. People use the staircase as a base of operations in selling them. You can also see how incense fills the air, as everyone is intoxicated with religious frenzy. 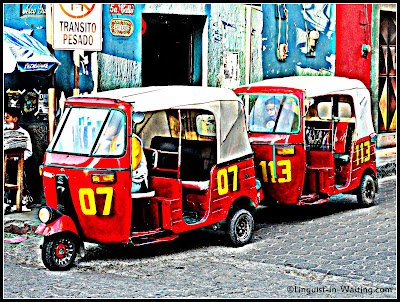 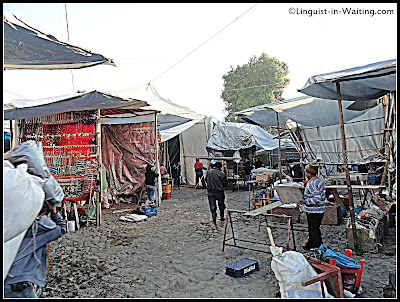 Meanwhile, people are setting up their booths. Shoppers and vendors arrive in town every minute, using every type of vehicle. One of the most interesting vehicles I have seen is this mototaxi. We have similar vehicles in the Philippines, called tricycles. Somehow, it's a local fixture here too. 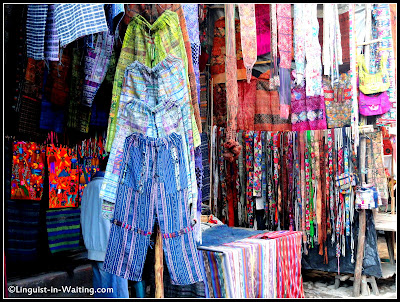 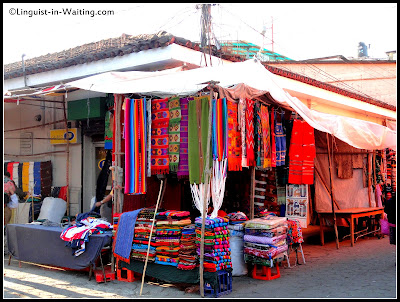 The market is huge, this is way huge than Otavalo outside of Quito, Ecuador. This one is crazy. If you want to buy live turkey, there's a vendor for it. You can buy breakfast, food, bread, live pigs, anything you can possibly imagine. 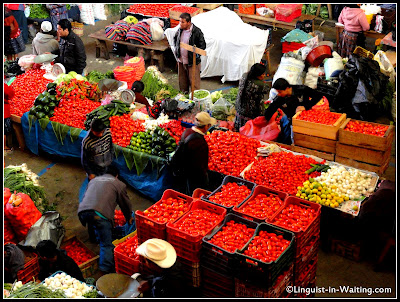 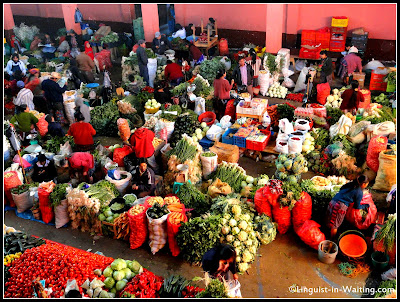 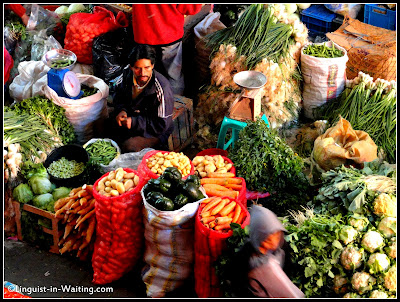 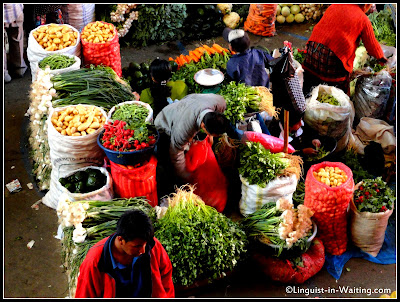 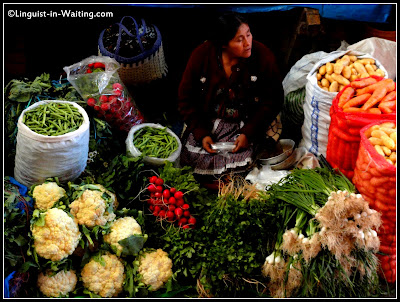 One area of the market that the foreigners rarely visit is the vegetable section. This is actually not at the plaza. Rather, this is inside a gym that is next to the plaza. There is a second floor that one can climb up to, which I did. I spent a few minutes observing the hustle and bustle of the market down below. There were plenty of people zooming by, and the most amusing thing I saw was the fact that there was a guy dedicated to selling plastic bags; he was standing right at the middle of everything. 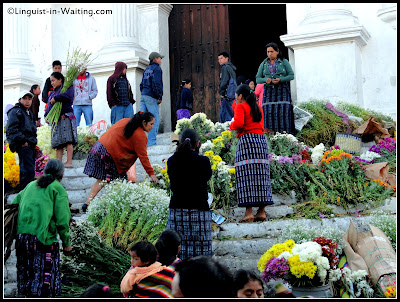 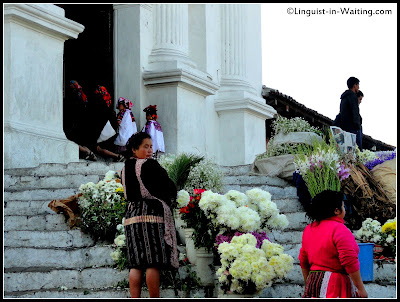 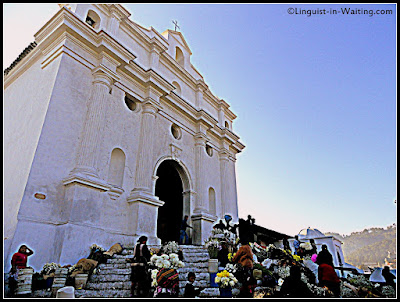 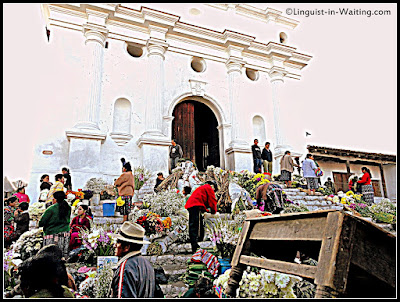 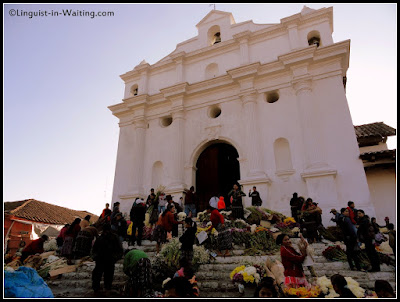 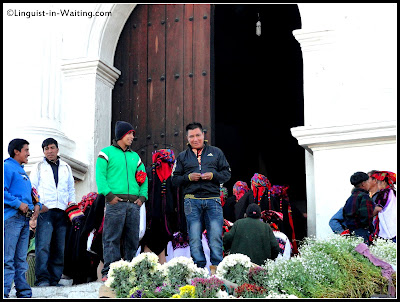 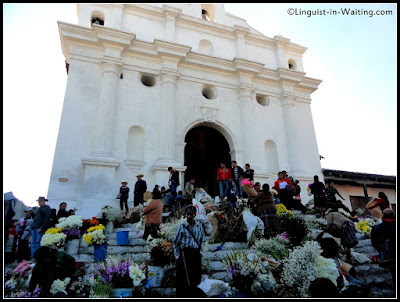 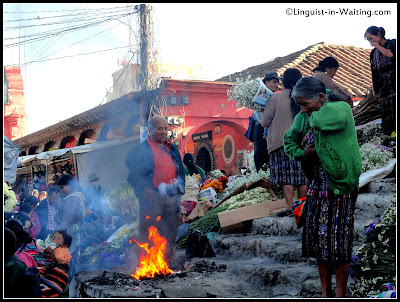 By this time, the religious ceremonies are well under way. There's a parade of Biblical characters that wind around the market, and they eventually enter the church. As you can see, everyone now wants a part of the staircase. It's like the most prized piece of real estate now. 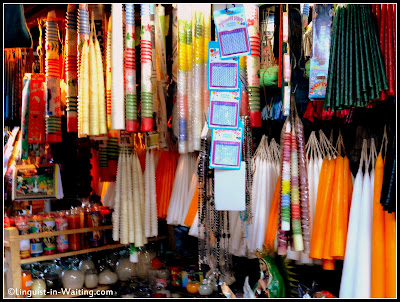 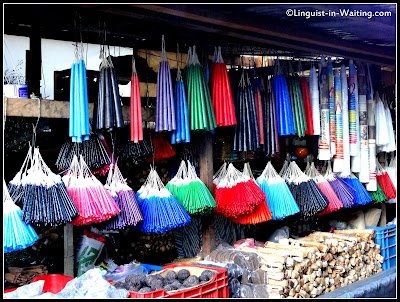 Of course, for the religiously-inclined, there's plenty of religious kitsch that one can purchase. In fact, it was not surprising that the closest stall to the church entrance sells candles!

So there, that's my experience with the famous Chichicastenango market. It was fun, and I don't mind doing that again.