One of the habits I acquired by being here in Buffalo was enjoying the vast selection of good music that is available. So, when the semester was ending a few weeks ago, I watched another recital by the UB Percussion Ensemble. They always have concerts every semester, and I enjoyed the one from last fall, so I had no doubt I will enjoy the one for this semester as well.

The concert program was spectacular: they opened with Gene Koshinski's As One, from 2007. That was quite captivating. It needed two players, not playing in duet, but playing as one. The two players had to be really synchronized with each other, as they played the same melody lines. This was most evident in the use of the marimba, with both players playing the same melody, but the notes are distributed across each of them. Naturally, this entails that one of them stand on the other side of the marimba, playing it backwards. I loved that.

The second piece was Daring Doris by Megan Beugger, a composition student here in UB. This is actually the second time I have seen this piece, after attending the recital of Bob Fullex and Jason Bauers, two performance students in the music department. They performed this piece again as part of this concert, and I have to say that I still do not like the piece. I guess this critique has nothing to do with the performers; I have seen them play before and I love their work, but I just cannot make myself love the piece. If this piece was presented as performance art, and not music, then probably I would like it some more. But no, for me, it simply looked like they were destroying a piece of cardboard on stage while making sounds and mimicking actions of a couple having sex.

The third and fourth pieces were Duettino Concertante by Ingolf Dahl, which was in three movements, and Pulse by Henry Cowell. I enjoyed these two pieces, but have nothing much to say.

After the intermission, I heard Musique de Tables by Thierry de Mey. This requires three percussionists making music with just their hands on the table. They made interesting hand movements, and I have to say, the three people were quite good at it, with impeccable synchronization. It was fun watching and listening to it.

Finally, they performed Uneven Souls by Nebojsa Zivkovic. I should say that I am glad that they chose this as the finale piece. It showcased the talent of Elizabeth Holland on the marimba. I sat there in the auditorium watching her get entranced as she plonked her way through that piece.

So after listening to the above pieces, I realized that I take the view that music is supposed to be falsifiable. Except for Daring Doris, all the pieces I have heard that night showcased the talent of the performers. The audience, as naive as one can be, still has the ability to see whether the performer knows the piece and performed it correctly. The performer still needs to practice, so to speak. And the audience can therefore see whether the performer has practiced it well enough or not. Even in a relatively simple piece tone-wise, such as Musique de Tables, synchronizing those hands takes effort and practice. That's why they are the performers and I am just the audience.

However, in Daring Doris, I don't get the same reaction. Yes, there was a sheet music on the floor, and the performers were reading it while performing, but the piece didn't display virtuosity, and it sure sounded like anyone could do it. Anyone could push and pull metal rods and violin bows against a cardboard.

So yes, I just raised music on to a pedestal. In this point, I disagree with John Cage in allowing anything to be called music. I understand that beauty is in the eye of the beholder, and so what is beautiful when it comes to music is pretty much a subjective question, but not only should music be aesthetically pleasing, but music should also showcase talent. Not everyone can produce music, only those who have talent and have practiced and worked hard for it. Because if anyone can produce music, then everyone should be qualified to enter music schools and pass the audition, right? Heck, in that logic, even a screaming monkey could easily get in. 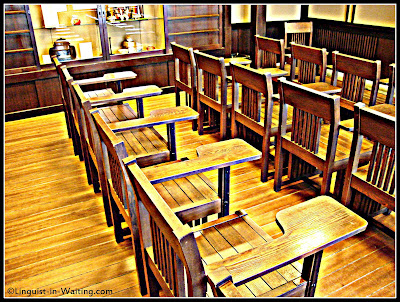 (Japanese Chairs, from my Cathedral of Learning Series)