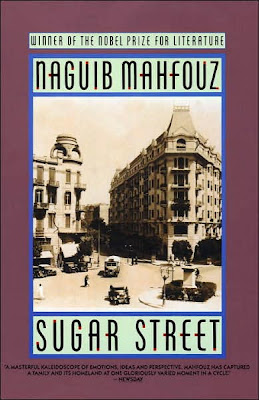 An edited version of this article was first published as Book Review: Sugar Street by Nagib Mahfuz on Blogcritics.org.

The parents have aged. What used to be the children are now the parents themselves. And change, in all its dimensions, is in the air. The saga about the al-Jawad family concludes in Sugar Street, Nagīb Maḥfūẓ's third book in the Cairo Trilogy. For the curious, here are my reviews for Book 1: Palace Walk, and Book 2: Palace of Desire.

Sugar Street begins around the time when World War II starts brewing. The British have almost left Egypt, and Hilter and Mussolini are buzz words in cafes and in households. Slowly, Cairo becomes engulfed with the war, with sirens blaring out air raids as the years go by. After the war, the Cold War begins, and Cairo wrestles with Communism and their followers. This is the political backdrop of the events that surround the al-Jawad family.

At the personal level, the powers that be in the al-Jawad family have also shifted. The patriarch, Al-Sayyid Ahmad, is now rendered powerless by old age and disease. He remembers "the good old days" when he was still allowed by his doctor to go out late at night, be drunk, and control his family with an iron fist. Now, his domain is reduced to his bedroom. The children, who are now adults, are the ones who control the household now.

Change is one recurrent theme in this book. Change appears in many dimensions. There is the constant clash between tradition, religion, and modernism. This is manifest in the status of women. They were merely obedient wives and daughters in the first novel, they were students in the second novel, and in the third novel, women are editors of subversive magazines and party members. The author does a wonderful job at portraying the natural human reaction to change, which is resistance. The older members of the family for example were berating one character for not being pregnant within one year of marriage, even voicing the opinion that women only marry for the sole purpose of raising children.

Change is also evident in the way the characters base their beliefs. The older characters are the devout ones. The matriarch, when she was still alive, made it a point to visit mosques and shrines every day for the good health of her family. The children on the other hand believe in political theories, such as Marxism, while some take a more pragmatic view and believe in the functional role of the government. I find this brilliantly handled by the author, when two characters, Abd al-Munim and Ahmad, while both being brothers and grandchildren of the patriarch, took opposing social viewpoints. Abd al-Munim decides to take the pious route and join the Muslim Brotherhood, growing his beard in the process; while Ahmad decides to take the Marxist route and declare himself an atheist. I believe it is Nagīb Maḥfūẓ's idea of a social irony when both brothers are imprisoned near the conclusion of the book.

Sugar Street may be an epic, centering on the activities of one family, with no focal character. Yet to some degree, I believe Kamal (the fifth child of the patriarch, the baby of the family, born several years after the fourth child) fulfills this role. He was a young boy in the first novel, and a university student in the second. Now, he is a teacher of English, and unmarried, due to the fact that his heart was scarred when he was rejected by Aida when he was yet a student. He has a huge head and a very prominent nose, which reminded me of Philip Carey, W. Somerset Maugham's protagonist in Of Human Bondage, who had a club foot. Kamal also is this character insulated from the rest of his society, never fitting in, just floating around, mingling here and there, which is the perfect character to observe and comment on everything that is happening around him.

Overall, Sugar Street is a very complex novel. Taken together, the Cairo Trilogy provides an excellent window to the social issues that were prominent in Egypt back then. I believe Nagīb Maḥfūẓ have made a great job cramming the story of Egypt into a story of the family, with every member representing a sector of Egyptian society. This is a very well-written book, and highly recommended. 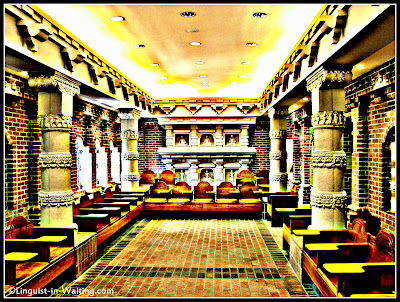 (View of the Indian Room, from my Cathedral of Learning Series)