Finally, I was able to attend a June in Buffalo event! June in Buffalo is a week-long annual series of events that center around modern and contemporary music. Several living composers come to Buffalo, and a series of performances and lectures and conferences are given. There are concerts every day for the whole week. And given that I like modern music, it is a surprise that I haven't attended an event until now.

Well, actually, I know the reason. The event happens in June, and yet, for the past couple of years, I was out of town during June. For the last two years, I was in Manila during June. Then there were the times in which I went to Europe, and so on. So I usually end up not catching any of the performances.

I almost forgot about this event, as I was busy revising my dissertation manuscript. However, I found some free time, and so I attended the Ensemble Interface concert. This is a group that performs modern works, and during the performance that I attended, they featured a pianist, a harpist, a violinist, a violist, a cellist, a flautist, a clarinetist, and a percussionist. It makes me think why would composers write music for such an unusual group of instruments?

But then I realized that everything is "unusual" in modern music. The music they played were largely atonal, the chords did not resolve, and it featured the diminished chord heavily. The harp was strummed at times, and the piano was plucked. "Abnormal" things were done on the instruments. I have to say that as much as the performers were amazing, sometimes, the music is not enjoyable. There was a piece in which I just slept through.

Oh well, that is modern music, sometimes, it is not for everyone. That being said, I am still glad that events like these are available on campus, as it makes living here great. I surely will miss this part of living here in Buffalo. 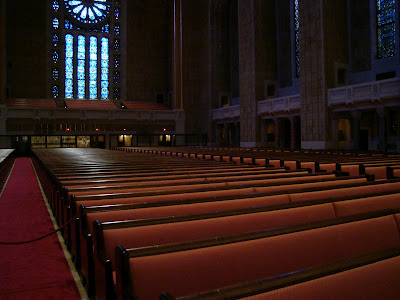 (Rows of Chairs, from my Temple Emanu-El Series)