It's a known fact that I like the outdoors. Therefore, when we were in Los Angeles, I made sure that we did enough activities that were outdoorsy. For this trip, the highlight was climbing Mount San Antonio. I've never really climbed peaks before (yeah, I chickened out when I was in Quito, due to safety issues, and I've hiked mountains before, but didn't actually summitted), so this will be a first.

We scheduled the climb the day after the wedding. We were already ready to go, but then we got a call from the newlyweds inviting us to have a late breakfast with them. That turned out to be quite beneficial, as we weren't really experienced climbers, and we only packed granola bars with us. But yes, we survived.

After having two breakfasts (one at the hotel, then one at the newlyweds, who called after we had our first breakfast), we drove about an hour east, and found Mount Baldy. We parked into the Visitor Center and got a map. The summit of the San Gabriel Mountains is Mount San Antonio, also called Mount Baldy. I will use these two names interchangeably. 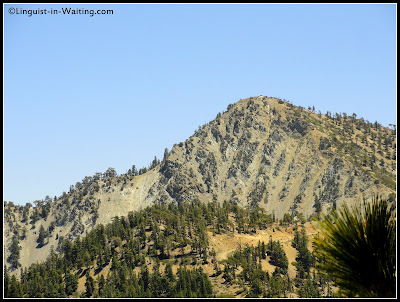 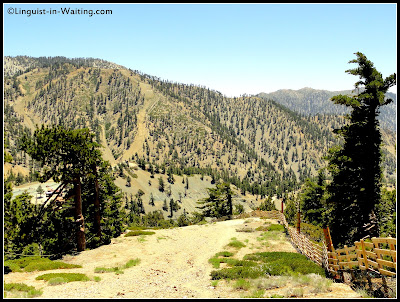 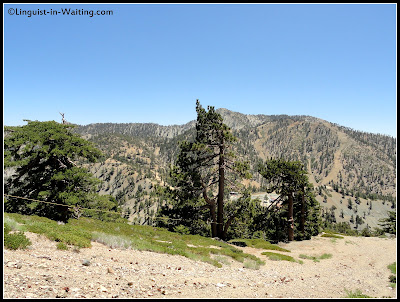 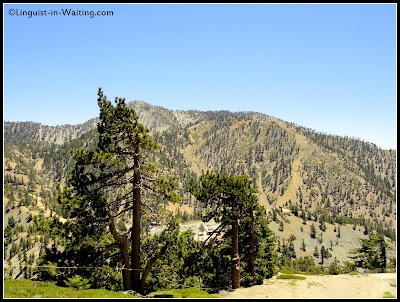 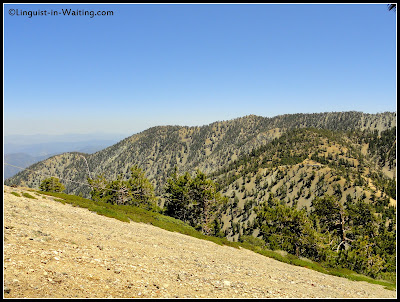 The first five pictures you see above represents Part 1 of the three-part climb. Yes folks, this was a 6-hour endeavor. It took us about 3 hours to climb up, and about 2 hours to climb down. The first part involves going up the face of a mountain, which is a ski range in winter. Hence, the grade is rather steep, although wide. The pictures above show you the scenery, which is great already, but it will still improve. 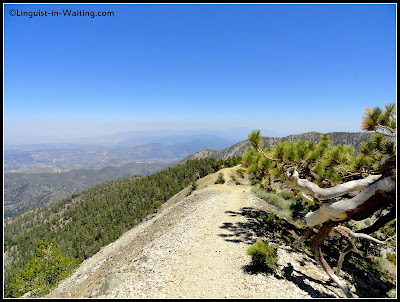 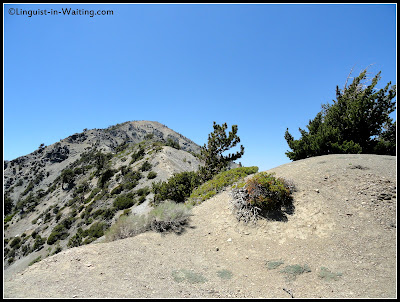 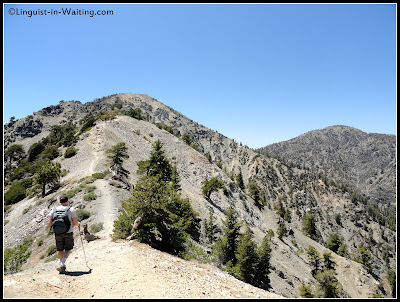 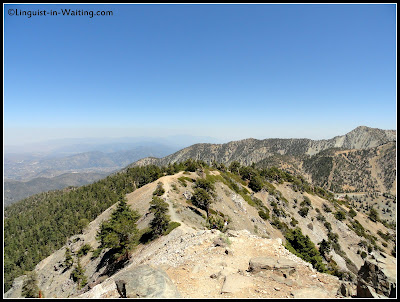 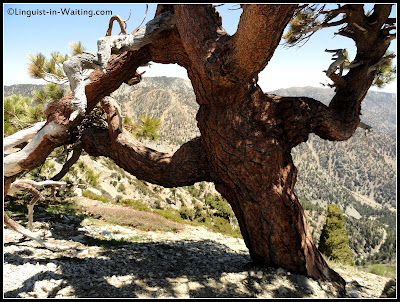 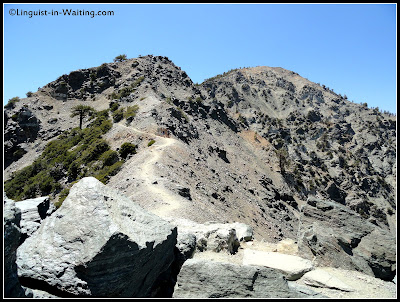 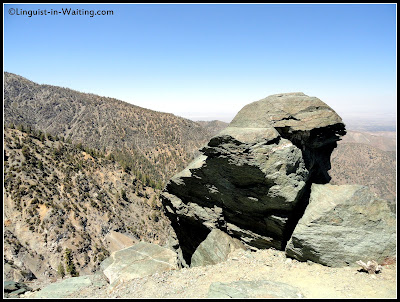 The next pictures you see above are shots from Part 2 of the trek. This is my most favorite part, I think. We are now finished with the ski range part, and so the trail significantly narrows, yet the ascent is rather gentle. The scenery is spectacular. And if you have a fear of heights, I suggest that you refrain from going here, as this is called the "Devil's Backbone Trail", where the trail is just a couple of feet wide, and there are steep drops both on the left and right of the trail. It was quite an adrenaline high. 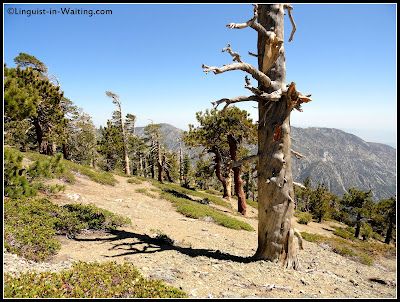 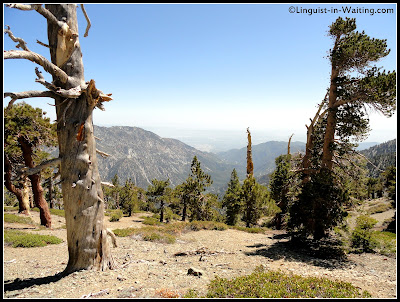 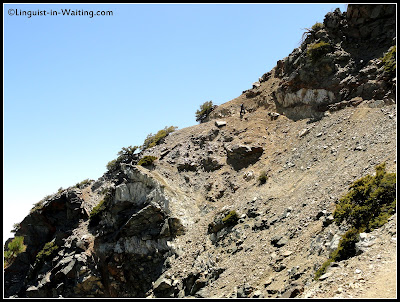 There were some parts where the trail started becoming a little dangerous: we made sure that out footwear had a good grip. This was also the experience in which I thought that it would be a good investment to buy a pair of hiking sticks. The trees also started getting weird. This meant that Part 2 is about to be over. 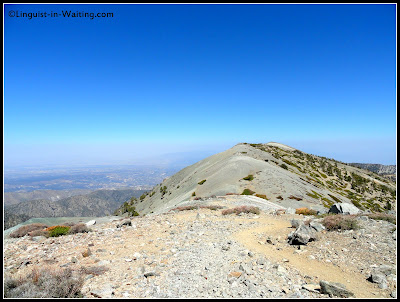 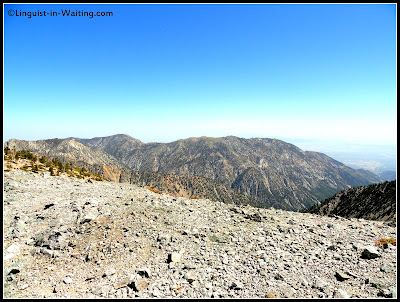 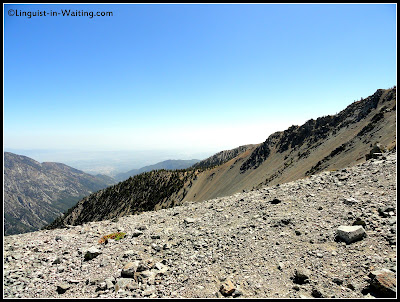 Then we started Part 3. This was a difficult stretch as well. This is the final leg before the summit, and it consists of a series of difficult switchbacks, that we had to take breaks after every switchback pretty much. I noticed a helicopter hovering behind us, watching all the trekkers. I was wondering whether this would be the first time I would experience being airlifted. Thankfully, it wasn't. I developed two big blisters on both of my heels, however, suggesting that my old hiking boots needed to be replaced. 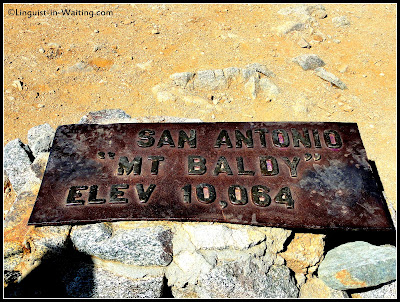 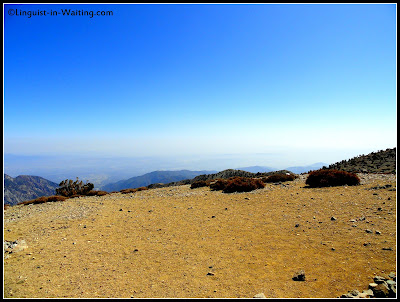 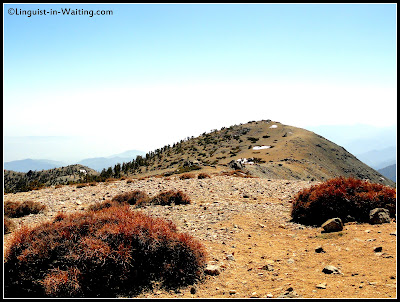 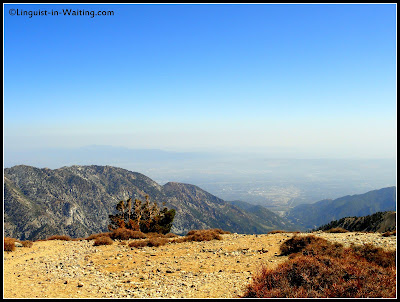 Finally, after 3 hours climbing up, we made it! It was such a wonderful and spectacular and awesome feeling to be up there, seeing that nothing else is above you. It was great, so we just sat there at the top, proud of ourselves, eating granola bars. Note to self, next time we do something like this, pack more food, and more water. Definitely more water.

We lingered around the summit for about fifteen minutes, after which we decided to slowly descend. Climbing down is definitely easier than climbing up. After two hours, we found our car again, and drove back to the hotel. That was a wonderful afternoon, and I would totally do it again if I have the chance.