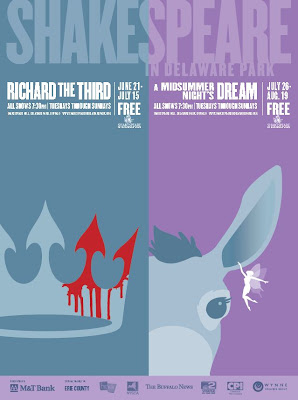 This is perhaps the last time I will get to see a production of Shakespeare in Delaware Park. So when the opportunity presented itself, we grabbed our lawn chairs and went down to see the production of A Midsummer Night's Dream, which is this hilarious romantic comedy written by Shakespeare back perhaps in 1590.

This play tells the tale of two pairs of lovers: Hermia and Lysander, and Helena and Demetrius. Both Demetrius and Lysander love Hermia, but Hermia wants Lysander, even though Hermia's dad wants Demetrius for his daughter. Helena wants Demetrius. Hermia's father makes Hermia choose either Demetrius or death. So Hermia and Lysander escape into the woods, inhabited by fairies, and where weird and magical things happen. The fairies put some magic potion on to their eyes while they were sleeping, so when they all wake up, both Lysander and Demetrius now love Helena, and nobody loves Hermia. Helena freaks out, and Hermia gets jealous.

I thought that the plot was ingenious, if a little too voluminous. I would have been content with the twisted lovers, but no. Apparently, Shakespeare felt that there should be a sub-plot, so he introduced the group of artists who wanted to perform a play, and while they were rehearsing in the forest, one of them is transformed into a donkey, and the Fairy Queen falls in love with him.

Anyway, the play progresses, and the twisted lovers are fixed. But there's a play within a play, with a twenty-minute death scene. That made me think, what exactly is the role of this play within a play. I didn't quite get that. So plotwise, Shakespeare may have a witty idea, but he complicated it too much I think. I see the value in minimalism, but apparently he doesn't.

About this specific production, however, I loved it. The play is originally set in ancient Athens. But this time, they moved it to the British Honduras (or modern-day Belize), in the 1920s. There are jungles, swamps, Aztec sun stones, Mayan pyramids, and so forth. It was anachronistic, but it does the job. The actors were spiffy, and delivered well. I especially enjoyed the choreography of the fairies, as well as the dynamic between the Fairy King Oberon and his assistant Puck.

Overall, it was a great production. As much as Shakespeare is a playwright that is hard to stomach at times, this production made it quite palatable, and I found myself enjoying the whole evening, laughing out loud to the tricks seen on the stage. 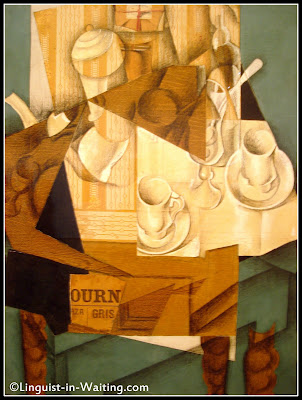 (Cubist Cafe, from my Museum of Modern Art Series)