Book Review: Kafka on the Shore by Haruki Murakami 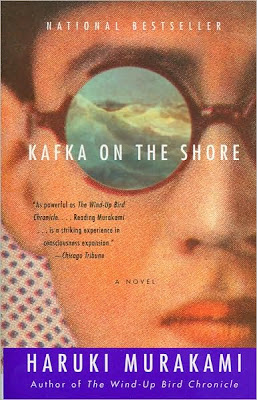 Should I preface this review by saying first that this has been one of the most mentally-taxing books I have read in a while? The material for this book is so left-field that it virtually made my head spin.

Kafka on the Shore tells the tale of two characters: Kafka Tamura, a 15-year-old run-away; and Satoru Nakata, an old man who works as a cat catcher. Both characters don't run into each other, yet their paths eventually collide into the metaphysical and fantastic chasm of Takamatsu. And as their stories progress, there are fantastic occurrences that happen, from raining leeches and fish, to talking cats, to spirits that get out of their bodies to have sex or kill people. I won't attempt to provide a synopsis that is clearer than what I've already wrote, as it simply is impossible without reading the book yourself.

At first, I didn't know whether I liked this book. The book began quite dramatic; early on, the build-up towards the scene where Nakata kills Johnnie Walker was quite distressful. It actually reminded me of Seito Sakakibara and the Kobe child murders, which happened in 1997. I was in Japan at that time, and I could see parallels from those bizarre events to the bizarre events that were narrated here. Hence, I thought that this book was creepy.

That being said, I should give kudos to Murakami for writing a page-turner, even though the themes of the book are less suspenseful than what one usually expects for page-turners. Here, several themes are explored, from potent sexuality, to feminism, to Japanese traditions. Using these elements, Murakami carved a book that portrayed a very complex and difficult narrative. Time is non-linear, the narrators are plentiful, and the reader is left to himself to piece together what he thinks the story should be. Even after I finished the book, there are several questions that remain unanswered. And I think this is what makes the book beautiful.

Before completing the book, I thought that the book didn't have originality. Of course, there's the perceived link to the Kobe child murders, there's also this transcendental love affair between characters: a 15-year-old boy falls in love with a mid-50s woman, but not at the current woman, but at the apparition of this woman as a 15-year-old girl. I thought that was kind of creepy too; having sex with a ghost. It also reminded me of the movie Somewhere in Time, as like the story in the movie, there are characters here who fall in love while transcending the temporal dimension.

Finally, this whole scheme of Kafka killing his father (albeit through another body) and falling in love with his mother, that's the myth of Oedipus retold. Murakami just rehashed it and put a metaphysical dimension to it.

So, upon finishing the novel, I realized that as much as the individual pieces of this novel may be from somewhere else, it still takes a genius to bring all these together, and blend it in to form a somewhat coherent whole. That I think is where Murakami's genius is. He makes it looks like metaphysics is a piece of cake. It forces the reader to detach oneself from reality, as in this book, the world of dreams and reality intersect, that it really is hard to tell which one is which.

I don't claim to understand this book. Depending on the time of the day, sometimes I feel that I understand it, sometimes I don't. I usually don't read a book one more time, but this is one book that I am seriously tempted to do so. Ask me again after a few months. I give this book 5 out of 5 stars. 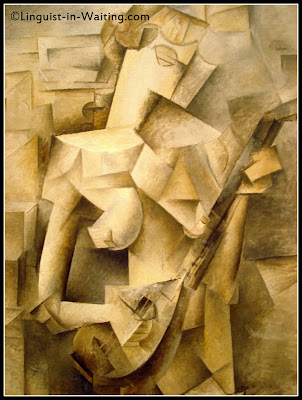 (Cubist Human with Instrument, from my Museum of Modern Art Series)