A few weeks ago, the weather was so hot here in Buffalo. It seemed that we baked and baked, that we all decided to head out and find places that have air-conditioning. Later on, I learned that the heat wave that the United States experienced from late June to mid-July was the worst since 1956.

And yet people still do not believe in global warming?

Anyway, enough of the political banter. Whether you believe in global warming or not, this summer is hot. Really hot. And it doesn't help if the house has no air-conditioning.

So we just blasted the fans when we were at home, and we made it a point to be outside and spend more time in air-conditioned places when the house became unbearable. We became regulars in Starbucks, in other coffee shops, in grocery shops, and so forth. It's just too hot this summer.

The good thing is, if you take it into perspective, the weather here in Buffalo is way milder than the ones for cities south of us. I have read that Washington DC became way hotter than us, breaking several records.

Again, why would you not believe in global warming? 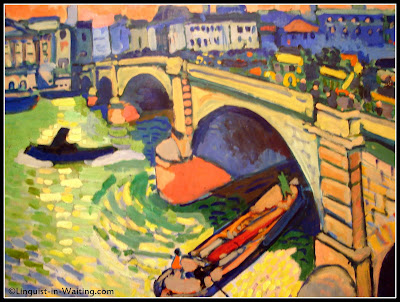 (Colorful Bridge, from my Museum of Modern Art Series)