I was in New York City again a couple of weeks ago, and since I try to catch a play every time I am around, I decided to do it again this time. I returned to 59E59 Theaters to watch Hell: Paradise Found, which is a comedy by Seth Panitch.

Several interesting characters are involved: there's Frank Sinatra, Elvis, Vlad the Impaler, Lizzie Borden, among others. They each tell the lawyer, Simon Ackerman, why they are in hell. And who knows, they might be able to convince him that hell is indeed better than heaven.

So, as much as this is a comedy, it actually touches on strong issues that I have been caring about for a while now. The contrast between heaven and hell is tackled, and what it means exactly to believe in heaven. There is a great scene between God and Satan, where belief in God is practically reduced to being robots. I also liked the way how knowledge is treated here. God argued that humans are incapable of using knowledge on their own, that they needed someone to guide them. But I liked the counter-argument: if knowledge is too powerful and dangerous for humans, then why create humans who can think in the first place? Why presume that sheep always needs a shepherd to guide them? If sheep can return back to their homes unguided, then the shepherd would be out looking for another job.

So yes, in addition to providing strong arguments against religious and conservative views, this play also manages to insert a few jabs against Republicans. I really am surprised that this play is a University of Alabama production, as I wasn't expecting a play of this content from a red state.

Aside from that, the stage was minimal, and all actors had multiple roles. The costumes weren't the most impressive; I mean, the wigs looked like wigs. That being said, the comedy and the anti-religious import of the play more than compensated. I am glad I was able to see this on the opening night. 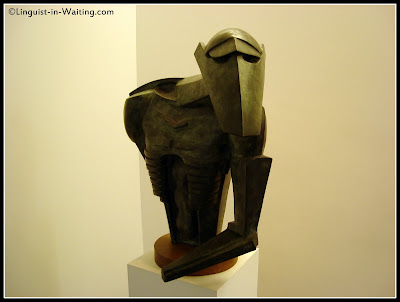 (Interesting Sculpture, from my Museum of Modern Art Series)