This past week, two of my friends moved to a different apartment. And they asked us for help in moving. So we went, and huffed and puffed, and at the end of the day, we all had sore bodies.

Yeah, my friends, who are married, were moving from their second floor apartment, to another second floor apartment. The old building doesn't have an elevator, so getting things up and down the staircase was a pain. Not only that, the building wasn't designed well; it's one of those buildings that look like they were one single family dwelling back then, but was partitioned into several different units now, so the staircase was so narrow it was unbelievable.

Anyway, the things were already in boxes, and so we just hired a truck, and loaded them into it. I had a count of the steps present in the staircase; there was a flight of 8, then a flight of 7, followed by a flight of 7. Oh, and a single step to the sidewalk.

The good thing is that the new house has an elevator. So we used it a lot. And we didn't have a dolly, but we used the office chair which has wheels to cart things up and down the corridor.

8 hours later, we finished moving everything, and our muscles were just so sore. I had bruises on my arms, in 8 different locations. But, it is a grand workout, I should say.

It later made me think how much stuff they have. Between the two of them, wow, those were a lot of boxes and other pieces of luggage. I on the other hand only have about 8 boxes worth of material possessions that I am shipping to Germany when I move. I guess it does make a difference when one is used to moving. My Buffalo-Berlin move will be my 9th move: and all other moves have been international in nature as well. Sure, I've changed apartments a few times while I was here in Buffalo, but that doesn't count. After all, I don't need to uproot and replant myself totally during those times. I don't need to create a new bank account, or get a new phone number, or get used to a new way of living because I am in a new city and environment. 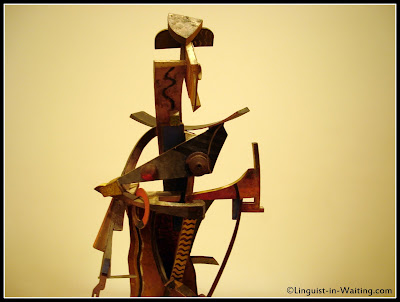 (Sculpture with Many Parts, from my Museum of Modern Art Series)