A few weeks ago, I received an email from a concerned parent telling me that her daughter was failing a class in a university, and so she was wondering whether she could hire me as a tutor so that her daughter can pass the exams.

A few semesters ago, I had a student who wasn't doing well in class, so his mother called the department (the department secretary spoke with her) and asked what her son could do to be better in class.

I big part of me thinks that it isn't proper anymore. Sure, parents can give advice to their children, I am not saying that parents should be totally hands-off as if they don't care about their children's academic performance. But, what I do not understand is this spoon-feeding culture that I sometimes see. The way I see it, unless parents let their children handle things on their own (after all, by the time they are in college, they are of legal age and are definitely adults), then the children won't be able to learn things about responsibility.

When I was in college, I was told by my parents that I have no wiggle room; in other words, I only had 4 years to finish my degree (5 if I decided to do an engineering degree, as those degrees took 5 years to finish). They graciously put me up through college, but I couldn't afford to fail a class and retake it again. In essence, I was responsible for my academics. If I slacked off, or strayed away in a way that affected my studies, I would be responsible for it. Thankfully, I finish college in 3 and a half years.

If the children fail a class because they didn't study because all they did was drink and party, then they should reap the consequences. Life is all about cause and effect. And children, especially college students, should learn how their current actions can influence later episodes.

I just find it rather disconcerting that some college-aged children just party like no tomorrow and then when they encounter a D on their transcript, they rush to their parents and ask for help. Learn to be responsible for your own actions, for crying out loud. And yes, you're old enough to deal with problems in school. You don't need your parent to hold your hand. 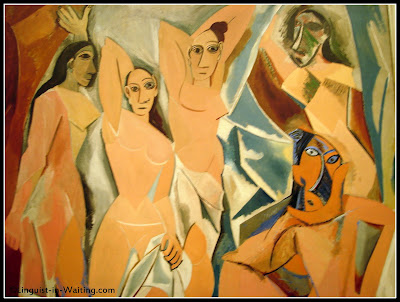 (Naked Cubist Ladies, from my Museum of Modern Art Series)