So by this time, I have selected a shipper to ship my goods to Berlin. I have already signed a contract, and upon doing so, I wrote the other shipping companies an email telling them that I won't be needing their services anymore. Later on, I learned that saying no to people can be hard sometimes.

After a few days, and after a few emails and phone calls, I have decided on one company. Upon deciding, I emailed the others saying I won't be working with them. Some were polite and emailed back wishing me well.

Others however kept calling, that sometimes I get a phone call a day. It was rather annoying, because it actually forced me to be rude. I told one that his quote was too expensive for me, and he immediately gave me a new quote knocking off 500 USD, but that was still expensive. He then tried asking which company did I sign with, at which point I told him that I think that is private information and I have no obligation to give him that information. So he hung up.

Another one called me asking how much stuff I was shipping. When I determined that this wasn't the company I signed up with, I told them that I don't feel comfortable giving that information away, even though they just want to know about it to assign "credits" whatever that was.

Anyway, as far as I was concerned, all I asked was a free quote, and these companies gave me quotes on how much they will charge me to ship my stuff. I found a cost-effective one for me, and that's all. I have no obligation on others, so I really don't know what these other companies want. These shippers are vicious, I tell you. 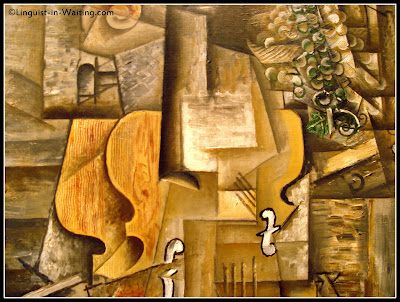 (Musical Instruments?, from my Museum of Modern Art Series)