Catching Up After Twelve Years

I’ve met a friend recently, who I haven’t seen since 2000. Yeah, a friend from Japan, who I went to high school together, happened to be in Berlin for the weekend. She lives in Hamburg, but was in town to attend a concert. Hence, since we haven’t seen each other since 2000, we figured it would be a great idea to meet.

So we did, we had coffee in a coffee shop near Pariser Platz, just a stone’s throw from the Brandenburg Gate. And wow, many things have happened. I suppose there’s a script for occasions like these, but one tends to talk about oneself, and then listen while the other person talks about his/herself, and then one exchanges information about other people that we mutually know.

So yes, that’s what we did. I told her what I have been up to. What happened to me after I left Japan in 2000. Where I headed to after that (Guam, Manila, Buffalo, and then here). Where I graduated from high school, and where I went to college. What I majored in college. What I did after college (graduate school). What I do for work.

Then we gossiped about people we know, what they are doing and where, and so on. Our high school in Japan was a special one. We were on an International Culture Track (High school in Japan has several “tracks”; most do the Regular Track, and the most popular non-regular track is the Science and Math Track. Other tracks involve the Music Track; these tracks have emphasized curricula for these subjects, intended to train students for further specialization when it comes to college.). There were about 80 students in this track, divided into two homeroom classes. The track emphasizes foreign language, and most of the students in this track are Japanese expats who have spent a significant amount of their lives outside Japan. I spent two years in high school here, and even though there were two homeroom classes, I pretty much knew almost everyone in the track, since we did things together most of the time.

There was a huge gender inequality in this track; I think there were only about 8 boys and the rest were girls. The opposite was true for the Science and Math Track; there were only 5 girls in a class of 40. Anyway, we later realized that most, if not all, of the boys in our track are doing amazing things right now. I still keep in touch with most of them.

TS is a lomography photographer. He apparently went on to study photography in the United Kingdom, and actually had an exhibit here in Berlin. Unfortunately, I missed it. He is back in Japan, but does several exhibits all over the world it seems.

AM is a documentary film director. He went on to graduate school in New York City to study film, and now he works for NHK (a Japanese TV station), filming documentaries all over the world. I actually met him once when I was in New York City. We still keep in touch.

KS apparently is living in California. I am not sure what he is up to.

SK has founded his own company. I don’t know what the company does. We still keep in touch every now and then.

RS is an actor in Japanese showbiz. I’ve seen a trailer or two of the films he was in. Sometimes, I see on Facebook pictures of screenshots of television programs where he was in. So far, I guess he is the most famous of the guys in the class.

TI is a fashion model. He is based in Hong Kong now, working there in the fashion industry. I’ve seen a few of his photos. He looks whoa. We still keep in touch.

KT is married and has a baby now. We don’t know what he does for work, but it seems he is doing great with respect to parenting.

Of course, we gossiped about the girls in the class too. But there were too many of them to enumerate here. Oh well, all that talk and the hours passed by quickly. Soon enough, we had to leave, and there ended the day.

It was great seeing a friend from the past. Now, someone’s buying me coffee in case I find myself in Hamburg. The thing is, the world is getting smaller than before. I have friends from all over the world, and it takes effort to keep in touch with them. Good thing there’s the Internet. I have friends that I haven’t seen for ages, and yet we’re still able to keep in touch. 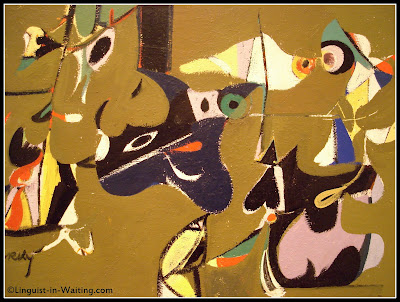 (Random Shapes II, from my Museum of Modern Art Series)