A day after I arrived in Berlin, I already had appointments to view possible apartments. Therefore, I headed out, zipping back and forth across the city.

This was actually the first time I went apartment hunting with a time pressure added to it, technically. When I moved from Manila to Buffalo, I actually just signed up for an on-campus apartment, thinking that it was the safe choice. After all, the university maintains it, so I signed up for one even though I haven't seen it in person. Then after living there for a year, I looked for other apartments off-campus, but then that was done leisurely, with no time pressure looming at all.

This time, however, I needed to find a place as soon as possible. After all, I cannot be a guest in a homestay all the time. So, even before leaving Buffalo, I made arrangements with real estate agencies to find an apartment, and they arranged viewing appointments for me. Hence, all I needed to do was show up.

I actually saw two apartments, even though I had a shortlist of 6. Good thing, however, one of the two apartments was actually one that somehow liked more than usual. I headed to the neighborhood an hour before my appointment, and scouted the neighborhood. There were plenty of little shops within walking distance: a cheese shop here, a meat shop there, a bookstore, a cafe here and there, some restaurants, and so forth. It is close to 3 subway lines, and it is within Berlin's Area A.

The other apartment was farther. It was in Area B, and there was only one suburban rail station that was close by. It is situated in the suburbs, and frankly, I didn't like the feel of it. It was not close to shops and stores, and the apartment is an attic apartment, with the downstairs floors occupied by a family. It felt like I am intruding and violating a family's privacy or something. And frankly, I didn't like that feel.

So, after seeing these properties, I went to the rental agency and finalized the agreement with the other one. I have a good feeling about this: I met the landlords (elder woman and her adult son) and they both were cheerful beings; they seemed very happy to have me. They live just a few minutes away, so in case I have a problem with the apartment, they're not very far.

Hence, I now have my own place. My own batcave in the middle of the city. I can now start settling down. I have a balcony, by the way. It faces west. It is equipped with an awning. Maybe I will put a plant in there.We'll see about that. 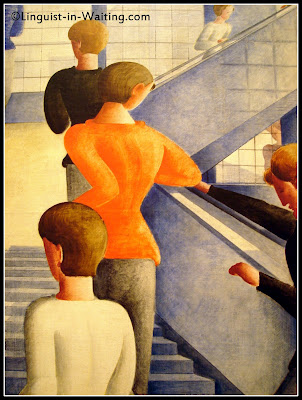 (People on Stairs, from my Museum of Modern Art Series)