How to Grad School: Finding an Institution and Adviser

I first thought that I would split these two topics, but then, I realized that it is so intricately connected, that I'd just discuss them both at the same time.

I suppose that's one way one can go through graduate school selection. Find potential advisers and contact them as early as possible, feeling whether they would be a good person to work with or not. After all, this is a commitment that lasts a few years, and if you guys don't get along, then you're life in graduate school will be miserable. I suggest that potential graduate students do this early on, contacting several professors, seeing what they are like.

What I would not recommend was what I did. I only contacted one professor, perhaps because I was so sure that I wanted to work with this guy, so I didn't even apply to other institutions. I was accepted, I got funding, and I took it.

Sadly, due to circumstances beyond my control, I didn't end up working with this professor. Instead, I found myself during my first year in graduate school without an adviser, so I had to shop around and find a different one.

Assuming students haven't found an adviser by the time they enter graduate school, or even if they have, I think it still is a good idea to shop around. Attend classes from various professors, sit in their labs, and see what they are about. Graduate school is where one specializes, as the fields of study are usually too big for anny one professor to be proficient at it.

During my time in graduate school, I have seen some students who just sit there, doing nothing, and then suddenly they realize that it is time to pick an adviser or else they will be kicked out of the program. I suggest that students be proactive about this. One would rather be ahead or on time, rather than late. Besides, the faculty members typically won't go out their way and invite you into their lives. If you want to work with them, you should let them know, instead of waiting for them to approach you. After all, they already have their own research programs, and to some degree, advising a new student is potentially detracting from their own work. Hence, a good student will market him/herself to this professor, convincing this professor that the student is worth the professor's time.

So there, the relationship between adviser and student has many aspects, more than I can cover here. Think of it as a marriage, that will end in a few years. There's the issue of compatibility. And incompatible pairs mostly end up in tragedy, if not, then the student is just miserable. You don't want to end up like that and be miserable for the next 7 years. 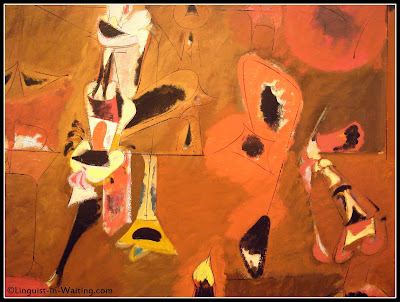 (Random Shapes III, from my Museum of Modern Art Series)