When I was still living in Buffalo as a foreign student, the one office where I had a lot of dealings with was the ISSS, which stands for the International Student and Scholar Services. This is a large office, responsible for making sure that all the foreign citizens that are connected with the university have proper paperwork. As a student, this is the office that I went every year in order to get my I-20 signed, which is the document that proves that I am a bonafide foreign student in the USA, and therefore have legal reason to be there.

I remember back in 2005, when I arrived in Buffalo. There was an International Student Orientation, in which I had to pay 70 USD in order to attend. It was mandatory, and it was pretty much a week-long event where new foreign students went around campus doing stuff, from filling out paperwork, to attending orientation programs, to opening bank accounts and cellphone accounts, to shopping excursions for basic stuff. Yes, this orientation was massive. I opened my bank accounts in the university, because the representatives of several banks visited the university in one session. If I wanted to have a cellphone, then representatives from cellphone companies were present in the university too (I remember not wanting one at that time, because I had a landline in the on-campus apartment that I was living in; I only got a cellphone one year later). If I needed a Social Security Number because I will be working in the USA, then there was a paperwork session for that too (I didn’t do that, because I already had a SS Number that I got during one of my previous stays in the USA). And if I needed new clothes, there was a bus that took shoppers to Walmart.

Now that I am not a student anymore, I still have to do the same thing over again, here in Germany, in a different language, in a language that I have less than ideal command of. There are several pieces of paperwork that I have to fill out and file, and frankly, sometimes it sucks my energy. Sometimes, I feel that I have a freaking PhD, but why do I feel stupid and helpless, as I cannot understand these simple forms, by virtue of them being in a different language. However, I cope by taking it as a challenge. I am a linguist, after all, I can learn another language. And it’s not like I am starting from scratch. I took two years of German in undergrad, so I have the basics under my belt already.

At this point, I have just a few remaining things to do to finalize settling down. I have to get a tax card, which is done by first registering with the District Office where I live, and then heading to the Finance Office. This is the one with the most priority. Next, I need to contact the Office of Migration and Refugees, in order to convert my working visa into a working permit, so that even without a visa in my passport, I can work, and get out and get back into the country if I need to. Finally, I need to get an Internet connection in my house. I still don’t have one, and frankly, this is low priority at this point, given the other things I need to do, so I am not rushing into this at this point. 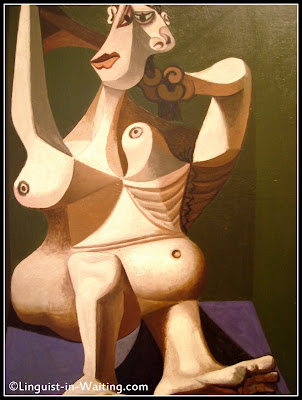 (Cubist Lady?, from my Museum of Modern Art Series)