One Man's Trash is Another Man's Treasure

A couple of weeks ago, I helped my friends do a garage sale. We had stuff we wanted to get rid of, so we joined a neighborhood garage sale and tried selling our stuff.

In order to do that, we set up early. The garage sale was advertised; there was a notice of it in the newspaper, and there were signs everywhere in the neighborhood too. It was from 9:00 to 3:00, but as early as 8:00, while we were setting up, there were people looking already, and we already made a sale.

We sold a very old lawn mower for 10.00 USD, and we also sold various knick-knacks and other random stuff. The saying is very true, one man's trash is another man's treasure. Even random objects that I thought would be worth nothing and is better thrown away were actually sold. Really, people like going through other people's stuff.

This is something I don't understand. Why would you want to buy a ceramic hot-air balloon? We sold candles, some were still in their packaging, given as gifts but never used, for a dollar or two. Americans are weird, they just have a lot of stuff, and they can fill their garages of these stuff to the point that they can swim in it.

Anyway, I filed that under my Americana category. I didn't realize that going through other people's junk can be a hobby. 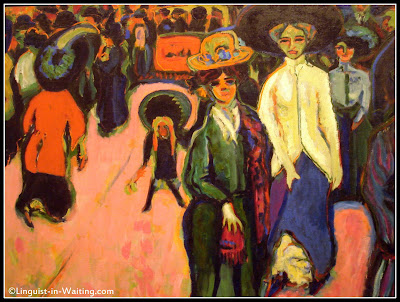 (Crowds, from my Museum of Modern Art Series)