So, I’ve been in Berlin for a week now. I have accomplished plenty of things with respect to settling down. I have found an apartment in a rather quiet area of town and moved in. I also finished setting up the electricity account for the apartment. With respect to the apartment, I only have to get an Internet connection, and I’ll be good to go.

My shipment is now undergoing customs checks in the United Kingdom, where it entered the European Community. It will be trucked and delivered to my apartment in a few weeks, hopefully soon.

I have an appointment with a bank this coming Tuesday, so that I can get a German bank account. They wanted a proof of residence first, so I needed my rental lease agreement in order to process this.

So, since Sundays are dead, I figured I might as well enjoy it. So this past Sunday, I went out, grabbed my camera, and started on my discovery of the city. I already found the Brandenburg Gate, as well as the Holocaust Memorial the day before (Saturday), when I was waiting for a friend for coffee. I haven’t seen this friend since 2000, as we went to high school together in Japan. It was great, but that’s for another blog post.

Anyway, for this Sunday, I wanted to go to the Pergamon Museum. So I did. On the way, I stumbled upon the Friedrichswerdersche Kirche. After lunch, I headed over to the East Side Gallery, and I ended my day with a climb up the top of the Reichstag. I will obviously blog about these different places separately, with pictures to accompany them.

So there, I got a break from running errands. So far, I like this city. 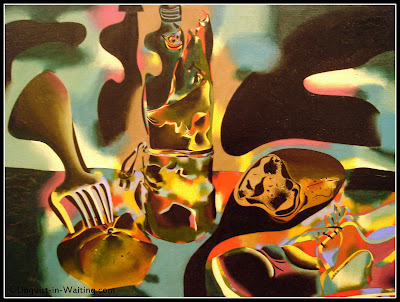 (Surreal Shapes, from my Museum of Modern Art Series)