For the past two days, I have seen at least three instances of parental epic fails. Seriously, sometimes I wonder whether it would be a good idea to require future parents-to-be to take a test before they are allowed to reproduce. Because seriously, that is not the way to take care of your kids. If you're doing that, then you're not supposed to be a parent.

For example, one morning, we were in the car, and we were stopping at a four-way stop. There was another car coming from the opposite direction, who stopped, and for the longest time, we were wondering why this car wouldn't go forward. Then the driver stepped out.

Why? Because she saw that there were two toddlers, perhaps around the age of 2, strolling right next to the curb. Really, they're just there, walking, just a few more steps into the road. So the drivere decided to stop, get out, and lead the toddlers back into safety.

And where are the parents? Oh they're there, five houses away, not even running to get their kids, instead, they were just sashaying towards the intersection, as if everything is normal. But this is NOT normal. You obviously do not know how to take care of your kids.

In another instance, we were in the car again, waiting to turn left at an intersection. An open-top jeep was turning left towards us, and in the back seat are two kids, swinging left and right, obviously not wearing a seat belt. The inertia makes them swing back and forth as the vehicle turns. Seriously? That's an open car! What if they fly out of it when the turn becomes too fast?

And in the same intersection, we finally got the green light, but guess what, there was a mother pushing a stroller with a baby on it, and crossed the freaking road! They crossed when the pedestrians have a red light and the vehicles have a green! What if the cars didn't see them and went instead, who gets hit first? The baby! 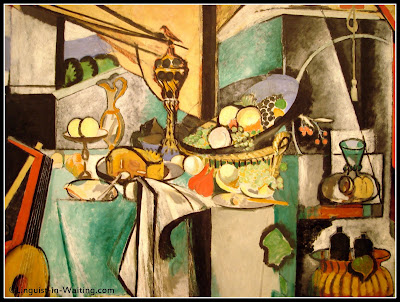 (Still Life, from my Museum of Modern Art Series)