So it is finally happening. I am leaving Buffalo, for good. This post is the result of the events that happened during September 1 and 2 2012, and the thoughts those produced in my little puny brain.

I was scheduled to fly on the afternoon of September 1. I had a 5:00 PM flight. The day before, I finished packing, and I was intending on taking with me 2 pieces of check-in luggage, a carry-on, plus my backpack which contains the documents that are important for me, as well as my laptop. The night before, I realized that one of my check-in luggage was rather overweight, so we decided to go to a post-office, buy a box, and pack some of my stuff in there and mail it instead, as that is actually cheaper.

Saturday, 7:00 AM. I woke up, had breakfast. After breakfast, we went to Starbucks and got coffee. The post office didn't open until 8:30, so we had a little time to burn. Around 8:25, we swung by the post office and bought a medium-sized box.

8:50 AM. We got back home and I packed some of the items that I won't be needing soon into the box. Then, we sealed it, and I finished packing. After that, we cleaned my room, removing almost every trace of my existence. I felt like being erased.

10:00 AM. I took a shower, then took the box out and mailed it. After that, we headed to Starbucks again, but this time, we did so because we were passing by a few friends and relatives and they ordered coffee, so we did a delivery run. Thirty minutes later, we met them, then said our goodbyes, gave each other hugs, and then went home.

12:30 PM. I took my luggage into the car. There's 4 pieces all in all. Then we headed to a creperie to get some lunch. After an hour, we headed to the airport. We parked the car at the long-term lot (since using the long-term lot for short-term purposes is actually free, while parking at the short-term lot for short-term purposes is not). We caught the airport shuttle, which delivered us to the terminal. I was 2 and a half hours early for my flight, but that was alright. At least, I was the only one at the check-in counter. I deposited my bags, paid the excess luggage fee, and bid goodbye.

4:30 PM. I saw someone I used to know inside the airport. Two of them. I think they saw me too, but good thing they didn't decide to approach me. That would have been a bad idea.

6:30 PM. I was at Boston Logan Airport. I had to change terminals, from Terminal C to Terminal E. I took the connecting bus, then checked in with Lufthansa using the self-serve kiosk. Good thing they weren't on strike that day. I went through security. I changed all my remaining US dollars into Euros. I was left with 3 dollars and some change.

7:30 PM. I wanted some coffee, so I used the remainder of my Starbucks card. The barista was a girl named Beda, and I was curious of the name as well as her accent, I couldn't resist not asking. So it turned out she was from Bhutan.

8:30 PM. My flight was supposed to depart 8:25, but the arriving aircraft was late, so we departed a few minutes late as well. As I was boarding, I saw newspapers in German. I saw Süddeutsche Zeitung, and only then did it hit me. Wow, I am really leaving. I am really heading to Germany. This is real. Whoops.

Sunday, 9:45 AM, Central European Summer Time. We arrive into Munich Airport and pull into the gate. This airport is awesome, it puts American airports to shame. My next flight to Berlin departs from the G gates, which means I have to go through Immigration first in Munich before I get to my gates. That was perhaps one of the easiest immigration processes whatsoever. I had a German D visa valid for 3 months. After using a special magnifying glass to check for security features of the visa, the officer asked me if I am in Germany only for 3 months, but I answered that I am actually moving to Berlin. He said "Oh" and stamped my passport, then I was on my way.

11:05 AM. My flight to Berlin departed. I slept through the whole flight.

12:10 PM. I arrived in Berlin Tegel Airport, which was one of the most unusual airports I have been to, in my opinion. I could go from the aircraft to the taxi stand in 5 minutes. After retrieving my luggage, I just decided to suck it up and get a cab, as my luggage was too plentiful to handle efficiently. I paid 20 Euros for the cab.

2:00 PM. I went out, with no map. I had an idea how the city is, but regardless, I didn't have a map with me. I bought a monthly ticket valid for Berlin's Area A and B. That means I can now just hop in and out of buses, subways, trams, and ferries within these two areas, which is already big. I found my office building. 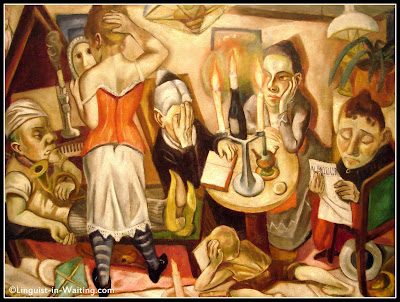 (Random People, from my Museum of Modern Art Series)