Big Corporations and the Security of Non-Surprisal

One day, as I got off the bus on my way to work, I decided out of the blue that I wanted some coffee. So the easiest solution to that was to pay a visit to the Starbucks branch that is right off the corner near Checkpoint Charlie. And I then realized that it took me 6 weeks after moving to Berlin before I actually visited one branch of this Seattle-based establishment.

See, upon entering, I wasn't surprised at all. All the scripts I had for visiting Starbucks that were all set and learned when I was still in Buffalo applied here. They had the same drinks. There are three sizes, tall, grande and venti. You queue up, and then at the counter, you give your name, so that at the bar, they can call you when your drink is ready. The only difference here is that everything is done in German, while in Buffalo, it was in English. Oh, they had no problem handling my fake name either.

Price-wise, Starbucks here is expensive. The prices are numerically the same as in Buffalo, but since the currency here is Euros and not US dollars, 3,70 EUR for a tall cafe latte is expensive. That's like 4,79 USD, and that's just a cafe latte. Imagine what a frappucino costs.

So, would I visit Starbucks again? Maybe, but only once during a blue moon. After all, there's plenty of interesting coffee shops around town, that are locally-owned and actually contribute to the livelihood of the local community, instead of benefiting some big CEO in Seattle. And in these coffee shops, the coffee is cheaper, and the setting is more local. Yeah, it's my hipster head talking, but whatever.

One good thing about the Starbucks branch I visited was that they do have Starbucks Berlin mugs. So in case you're collecting those things, then there's one more you can add to your collection. Hence, there's another testament to you being a patron of American big-corp establishments, wherever you may go around the world.

Yeah, I grant that there is a sort of comfort in knowing what to expect in a coffee shop when one visits chain establishments like these, but at the same time, I think that one is severely missing out on the whole experience of being in a foreign destination if one continues to patronize shops like Starbucks. I mean, if you really are looking for Starbucks when you're on the road, then why even be on the road at all? It's like a Japanese tourist eating in a Japanese restaurant in Greece. 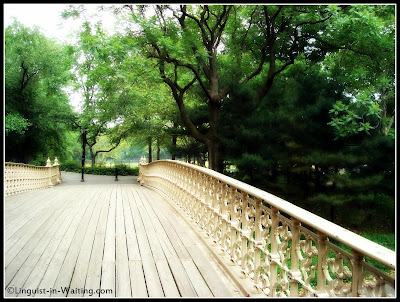 (A Bridge, from my Central Park Series)