By some fortunate coincidence, I took German in high school, as well as in college. I don’t remember much about the content in the German classes I took in high school, as that was quite a long time ago (it was back in 1998-2000, and it was in Japan), but I do recall the things I have learned when I was an undergraduate in Manila. I took a total of 24 credit hours in German, which in some universities, already constitute a minor.

Anyway, I was an undergrad from 2001 to 2005, so it was already a long time ago, but I am so glad that my brain retained much of it, that I do not find interacting with people outside the house daunting. Most days, especially during the weekends, when I would go out, I would only use German outside, and it would allow me to order my tea in a café, and find directions when I am lost, and so forth. I take the attitude that the more I interact with people, the more I would be less apprehensive about using this foreign language.

The other day, I was in a café in Kreuzberg. I ordered Jasmin Tea as well as a slice of cake all in German. About an hour later, one of the other café patrons asked me if I had a cigarette, in German. Later on, I asked the café staff what time they close, in German. I am slowly getting the hang of this place. The only time I feel stupid is when I get confronted with technical words and jargon, most of these are in the form of utility bills, bureaucratic paperwork, and other things like that. Anyway, it’ll come eventually.

I learned from the past, when I was learning Japanese, that making mistakes is actually a good thing, because that is negative reinforcement. Imagine learning a language without making mistakes. Then one doesn’t have these instances that will be deeply etched in one’s memory, guiding future use of the language. I remember being in a department store in Japan, and I wanted to ask the staff whether I could try a sweater on before purchasing it. I mistakenly ask her to try it on for me instead. From the look of her face, I knew that I made a mistake, but from then on, I knew how to properly conjugate the relevant suffixes so as to not ask the same stupid wrong question.

Most of the time, I am fine talking to other people. Whenever I get a stumbling block, I have this line and I tell them that my German is not that good. They usually simplify what they want to say after that, and things would be fine. I then would remember what they said, and look it up the dictionary when I get home.

I am also slowly discovering Berlinerisch. This is the particular German dialect that is spoken in and around the city. It’s not standard, but I figured it would be nifty if I learn a dialect of German that is not standard, alongside with the standard, of course. You see, my Japanese isn’t standard either. I have learned the standard during the first 6 months of my stay in Japan, when we were enrolled in a Japanese language school. However, we were living in Western Japan, and that has a particular dialect that is quite different from the standard form. In fact, when native Japanese speakers hear me speak Japanese, they find it funny that a non-Japanese can actually speak that dialect. It would be interesting to attempt the same when it comes to German.

Oh well, this is what, my fourth language? Spanish comes as a distant fifth, as I only know the important words and phrases that are especially useful for travelers. However, it still proved useful to me recently, as I had the chance to translate for a Spanish tourist trying to talk to a monolingual German guard, as the Spanish tourist was asking where to find the audioguides for the Reichstag and the German guard responded, but the tourist didn’t get it. 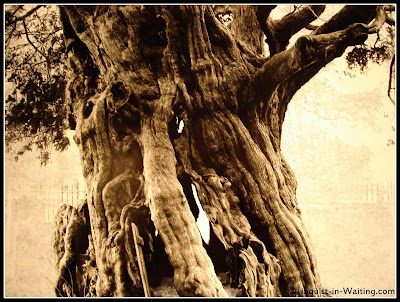 (Tree Picture, from my Museum of Modern Art Series)