In a few days, I will have clocked a full two weeks here in Berlin. And so far, things have settled down. At this point, I already have an apartment, I already have an electricity account with the electric company, I already have filed for a tax card and a health insurance account, and I already have Internet at home. I also already made an appointment with the Migration Office to apply for a residence permit. And I already have a bank account. I am still waiting for my shipment, but the shippers emailed me earlier saying they apologize for the delay, because it is high season in moving and the customs office in England are having a little delay.

In the two weeks that I have spent here, I already had plenty of chances to interact with locals, comparing them to my data points about Europeans that I gathered when I was visiting Europe a few years ago. I also was able to compare little details about living here, and how it is different from when I was living in the United States.

For example, the washing machine is rather small. I usually do one load of laundry every week, but I don’t think I can do that rate with this washing machine. I have to do it more frequently. Also, Europeans don’t seem to be fond of using dryers. So I have a clothes rack in my apartment, so that it can dry my clothes.

Supermarkets do not automatically provide you with bags. You have to either bring your own, or buy them yourself. There’s a small stack of plastic bags at the check-out counter, but they cost a little bit, so the technique is to buy a sturdier bag and use it and use it again. I already know about this, as this has been my experience when I was in Vienna, Prague, Odense, and Budapest. I actually think this is a great idea, as it forces people to recycle and think better about using resources.

I get a good vibe from the people here. My German is not that good, but they don’t get annoyed if I need extra help from them. This is not politically correct, as it totally relies on stereotypes and sparsely sampled personal experiences, but I think I prefer the social psyche of the Germans over the Austrians. I spent a good few weeks in Austria, and there, I have had multiple instances of being chastised by Austrians in public. Yes, in one instance, I was ignorant (I was throwing something in the wrong trash can), yet in another, it was just a case of one Austrian being so vigilant, that she wanted to correct me for something that is not even wrong (taking pictures without a flash in a museum). Those experiences therefore gave me the impression that Austrians are proud and haughty, something that I haven’t seen yet here. I get the feeling that Germans (or Berliners, at least) are more welcoming of different people.

Speaking of different, I like the multiculturalism that exists here. Every day, when I am out, I here a different language being spoken. They’re out there on the streets, in the metro, everywhere. Not only in language, but also in other aspects as well. You wanna be a punk, go for it. You have a leather fetish, nobody would mind if you parade the streets wearing that. The other weekend, apparently, Folsom Europe was held here, which is a LGBT festival that targets the fetish crowd. Oh my god, the area around Nollendorfplatz was just out of this world. And when the day ends, you see these costumed people heading home or to their hotel, perhaps buying food in KaDeWe on the way, nonchalantly chatting with the storekeeper while wearing a full leather attire.

So there, two weeks into my new city, and so far I am loving it. I have to admit, these past two weeks have been mentally tiring. After all, I dealt with so much paperwork, written in German, only to accomplish very simple things. If they were in English, I would have no problem with them, but then the language barrier sometimes makes me feel stupid, and so I think I have a freaking PhD and yet I feel like a little child at times. Oh well, I guess I’ll just take that as a challenge to improve my German, and I’d rather enjoy this city than sulk at it. 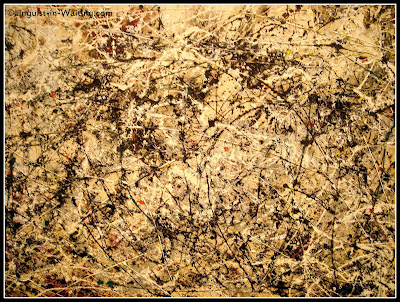 (Abstract Art II, from my Museum of Modern Art Series)