On Freedom of Speech and Immaturity

Last month, there has been an onslaught of attacks against embassies and consulates of the Western world, mostly those of the United States, that are located in Middle Eastern countries. This has been a reaction to the release of a video that is purportedly anti-Islam. Because of this video, masses of people sieged these embassies, even leading to the deaths of some high-ranking personnel.

So this made me think. Wow. Religion really messes up people.

It reminded me of the case of the Danish cartoon controversy back in 2006, if I remember correctly. At that time, Danish embassies were attacked because a newspaper in Denmark published pictures and caricatures of the Islamic prophet Muhammed.

So I think there's two things at issue here. Freedom of speech, and blasphemy.

I do believe in freedom of speech. However, I do not believe in hate speech. Just because one is free to have any opinion, that doesn't mean that one has the freedom to disturb the sensitivities of another. That being said, I believe that the reaction of Muslims in these countries show a conservative immaturity, that I just cannot fathom.

These crowds have attacked these embassies in protest to what they think is blasphemy. They think that this video has offended Muhammad and their religion. Now, seriously, if you think that is offensive, then you should realign your worldview.

As much as I think that freedom of speech does not mean freedom to hate, I think that the mobs that attacked the embassies are too immature and fundamentalist to always create a ruckus every time something that is non-aligned with Islam comes into the spotlight. 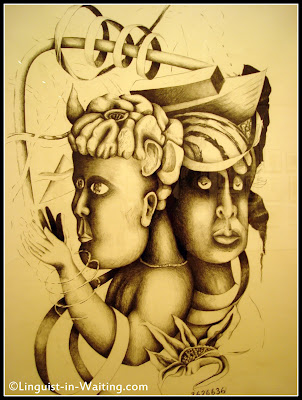 (Weird Drawing, from my Museum of Modern Art Series)