I rarely get scammed. But recently, I was. I was scammed 5 Euros by a Gypsy.

While I was heading to the tram stop in Alexanderplatz, a Gypsy approached me. She asked, "Do you speak English?" I replied, "Nein." Regardless, she stuck a piece of sign-up sheet clipped to a cardboard to my face, and pointed to a message written in German and English.

She asked for a signature. It was presented as a signature campaign for disabled persons rights. So here I was, the left-wing sympathizer, signing my name. It asked for my location, so I wrote "Berlin". I noted that the lines above me were all foreigners with locations all over the world, mostly from the USA though.

When I finished filling the form, she pointed at the last column, which was "Spende" or donation. Gee, you want money. Now by that time, my brain was too flustered as everything happened so quick, I just pulled my wallet out and got a 5 Euro bill. When I gave it to her, she said "10 EUR minimum!" I responded "Aber ich habe keinen." And when I made a move to retrack and take back my money, she just promptly said "Ok", snatched my money, and walked away.

So, based upon further research, it seems that these Gypsies (or Romani, or veiled dark-skinned women, however you wanna call them) target foreigners. I am not white, so I was a target. Hence, the initial phrase, "Do you speak English?" Beware, the lesson I learned here is to first read EVERYTHING. I should have taken my time and read everything the sign-up sheet said, instead of just trying to be quick and dismiss her as fast as I can, which was what happened. The thing is, that's the gut reaction, you encounter someone you don't like to encounter, so you try to dismiss this person as fast as you can. But in doing so, you're actually falling for the trap. I fell for it, if you're in Berlin, read this so that you won't fall for the same trick. 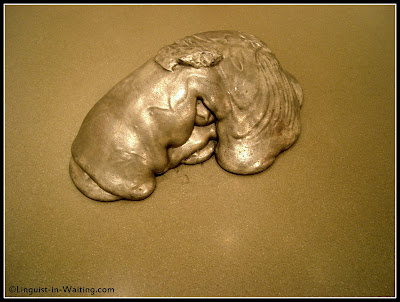 (This Looks Like Poop, from my Museum of Modern Art Series)