Every time I go to work, I pass by Checkpoint Charlie. This is the (in)famous checkpoint that once was the forefront of the Cold War. The north-south oriented checkpoint was a border between East and West Berlin, and the Berlin Wall used to run through this part of town. The building where I work happens to be located in a block that was adjacent to the wall, in the former East Berlin. So the closest underground station is Kochstrasse/Checkpoint Charlie, right next to the infamous intersection.

When I am early, I don't see them, but when I am not, oh my, this place is surrounded by tourists. They come in buses, in droves, and they're well equipped with large cameras. The actors that are dressed in old-time uniforms are making money out of these tourists, as you have to pay if you want a picture of them. Overall, I just don't understand why a simple wooden shed in the middle of the street, surrounded by kitsch and souvenir shops attract such a massive amount of people. I don't get it.

Perhaps what I don't get is the artificialness of the whole thing. Left and right, there are shops that sell bags where the famous "You are leaving the American sector" message are printed. There are postcards where a piece of "the wall" are attached, but who knows whether those are real or not. There is this very small section of the Berlin wall, which is now full of grafitti, but tourists still queue and take a picture of it. I almost wanted to tell them to go to the East Side Gallery near Warschauer Strasse instead, and that's a bigger and more preserved and prettier sample of the Berlin Wall.

I don't know. I do realize that Checkpoint Charlie is historic, and that it was once an important part of the history of the city. But I have this idea that the way people are treating it right now makes it look like the past has been trivialized, in one way or another. 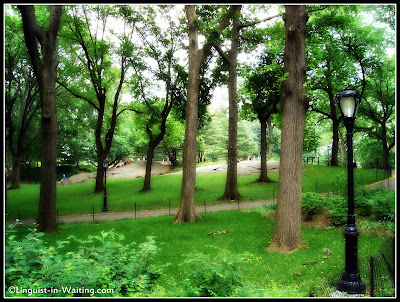 (The Greenery, from my Central Park Series)