A few weeks ago, as I was reading the news from my feeds, I was surprised at the article that mentioned how an American evangelist blames the damage caused by Hurricane Sandy on Obama, Romney, and the gay agenda. I think I had a slight aneurysm when I read that, that I had to reread it again after a deep breath.

Seriously, someone can attribute causation on the simple basis of co-occurence? It's not even correlation! I am not linking this evangelist's website here, because I feel that doing so would be tantamount to endorsing him and sending anyone who might find this article there and *gasp* believe him. Yet, if you really want to find this article, just go to your favorite search engine and search accordingly.

Perhaps what baffles me most is the idea that there are people who just want to see what they want to see. They are against Obama and the "gay agenda"? Then they would attribute every negative thing that happens around them to these "bad guys". Funny that gays and Obama are apparently the cause of Hurricane Sandy, when it was also amazing weather in California.

The problem with these approaches to reality is that it is very hard to disprove. Just look back at the Salem witch hunts back in the days. If there is a woman who is thought of as a witch, then she would be subjected to harsh torture, with the assumption that if she is not a witch and is actually holy or sacred or otherwise protected by ahem, God, then she would come out of it clean. But what are these tasks? Oh my, waterboarding?

I grew up in a religious environment, where I was taught that there was an entity called Satan who is causing all these problems. The funny thing is, this myth is untestable. Because an added premise is that if one doubts the existence of Satan and tries arguing that these problems are actually caused by something else, then Satan is said to be successful, because he wants people to be ignorant of him. So you either believe, or you believe. No other choice available. And no, you cannot test this belief either, because testing is tantamount to disbelief.

The sad thing is that sometimes, faith causes people to act in ways that adversely affect others. People who act based on faith want to dictate laws and other ordinances that affect others who do not share their beliefs. That, unfortunately, is the sad state of affairs, more in some countries than others.

Oh well, what can I do, but to simply rant? 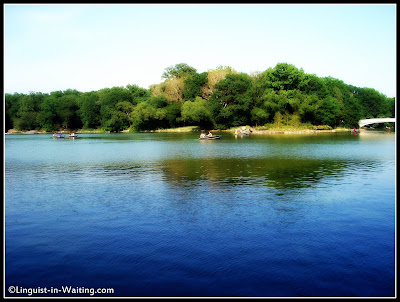 (The Lake, from my Central Park Series)