I've been making a list of the types of cheese I have eaten here so far. There are plenty of choices, and so far, I haven't repeated a single one. As I am a person who eats breakfast at home, I have been able to try these cheeses as part of breakfast.

I then tried Camembert, which is a soft milky cheese. Also from France, this contains 45% fat. As much as I enjoyed this one, however, I think I prefer this one baked, as I have tried that before, baked and drizzled with honey and almonds.

My third cheese was Fourme d'Ambert, also from France, also a blue cheese, and has a 50% fat content. Apparently, this is one of France's oldest cheeses, dating back from Roman times. I remember liking this a lot.

The fourth cheese I tried was from the Netherlands, a Machelle Ingwer. This is a very creamy cheese that is filled with ginger bits, with a 70% fat content. It is very spreadable, good for toast, but I think it lacks the aesthetic finesse that the other cheeses have.

I then tried a Danablu, from Denmark of course, containing 25% fat. The smell isn't that bad, and the taste actually is likeable. I think I like it, if not for the smell, but for the rich flavor.

Next, I tried a Rambol Walnuss, a cheese originating from France, most noted for its torte-style form, filled with walnut bits. It is soft enough to be spreadable, containing 55% fat, but taste-wise, it was just okay.

I then went on to try Bonifaz Chili, a cream cheese filled with chili, from Germany. This wasn't too stellar I believe, containing 70% fat. I wasn't too impressed by this one.

However, I still remained in German cheese territory, as I then tried Cambozola, a German cross-breed between Camembert and Gorgonzola. Somehow this was palatable, I actually liked this, and would repeat it if I want to. This contains 70% fat.

Still in German cheese territory, I tried a local version of the Cranberry Ziegenfrischkäse, which is pretty much goat cheese with cranberries in it. This is okay too, and rather cheap. It has a fat content of 50%.

Finally, I ventured back to French cheese territory, and tried Rochebaron, a soft blue cheese that takes about 6-8 weeks to age. It has a fat content of 55%, and remember liking this rather well, and I was amused that the grey-brown mouldy crust is perfectly edible. I like the subtle flavor it has, and is one of my favorite cheeses so far.

So, you may have noticed that I have stayed along the softer spreadable cheese area for the moment. That's just because I like spreading cheese on my bread, and have therefore strayed away from the harder cheeses. However, that is soon to change. So stay tuned, when I have tried another ten cheeses, I will let you know how they are. 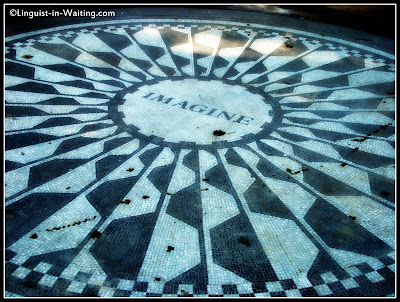 (Imagine, from my Central Park Series)