I recently noticed something interesting about my command of German. When I am in public, especially when there are plenty of people around me, I have noticed that I cannot tune it out anymore. When I hear someone speaking in German, I cannot help but parse it and understand it.

You know that feeling, when you're in a foreign country, and you do not speak the language. The spoken language just feels like noise in your ears. It is more obvious when the language that is spoken has no relation whatsoever with the languages you know.

It happened to me before, when I was in Budapest. Hungarian is a language I do not speak. And it also happens to be a language in the Finno-Ugric family, which is totally unrelated to English, German, Tagalog, Japanese, and Spanish, the five languages that I have knowledge of.

So when I was in Budapest, riding the metro, the announcements were just noise to me. I couldn't decipher when the words began and ended.

German for me used to be like that, at least the spoken version. When it's written, it's easier to understand, but oral German is harder, as people speak fast, and I couldn't catch up.

Now, however, I find myself riding the metro and I hear and understand people's conversations, people's phone calls, and so forth. The other day, one guy was telling whoever it was he was talking to at the phone to take some medicine tablets. He was saying that one should take them three times a day after meals. It's like I cannot tune it out anymore.

I suppose that is a good thing, right? I guess it shows that my German is slowly improving, which is indeed a good thing, if I find myself here in this country. 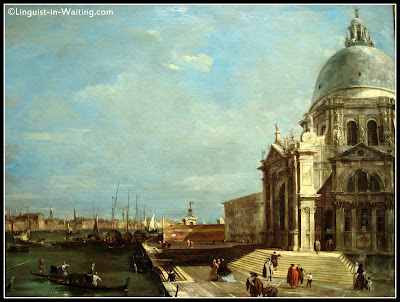 (Church by the Water, from my Art Institute of Chicago Series)