Cities and their Faces

So one Saturday, I bought myself a Berlin-Brandenburg Ticket. It costs 29 EUR, and is valid for all train lines within Berlin and the German state of Brandenburg, but more importantly, it allows one to reach Szczecin, Poland. This happens to be Poland's seventh largest city. The ticket is also valid in Szczecin's public transportation system.

So, just so that I can increase my country count, I have decided to visit Szczecin for a daytrip. When I got there, after taking a two-hour train ride, the feel of the city was very different from the feel of Berlin. First, it was smaller, way smaller. And secondly, the people looked different. All the men looked like they belong to the Russian mafia, and all elderly women look like these matronly characters that are ready to spank you with a paddle if you misbehave. Granted, I am stereotyping here, and writing perhaps something that isn't politically correct, but hey, first impressions usually are not politically correct, are they?

Second, within the same week, I went to Göttingen for a conference. I was there for 3 nights. It was a student town, smaller than Berlin but felt larger than Szczecin. The people looked different as well. There were too many people on bicycles, in fact, I think there were more bicycles than cars in that city. And everywhere you look, you see a young face, surely someone who goes to the university that made the town famous.

So after visiting these two different towns, I understood what the Berlin cityscape looks like. When I was in Szczecin or in Göttingen, I didn't see the typical Turkish crowd, the artists, the other varied people that makes the Berlin cityscape unique. I suppose, by getting out of Berlin, one gets to realize what is inside Berlin.

So yeah, I love this city. 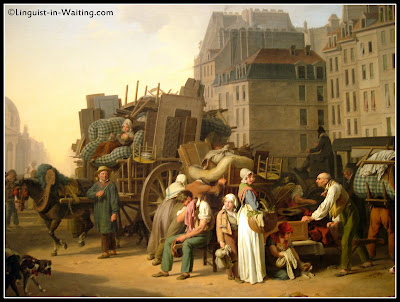 (Movers, from my Art Institute of Chicago Series)