I typically do not shop in the Kaufhaus des Westens, also known as KaDeWe. I've been here a few times, and most if not all the time, I feel like I am out of place. I feel like most of the shoppers here are the glitterati of Berlin, and the prices definitely match. It is unbelievable to see how many people crowd the luxury floor at the ground floor, buying jewelry, cosmetics, and all that jazz.

Anyway, I have to say, the times when I purchase something from KaDeWe, it's always from the 6th floor. Yes, it's the food floor. Oh my, they just have plenty of gourmet goodies that any foodie (not that I am claiming to be one) will be pleased.

When I was still new to the city, I already discovered this place, during my first week. I remember buying some bread and a few items from the tapas bar. However, I suppose the part of it that makes me happiest is the cheese section. I finally found it the other day, when I decided to expand my cheese horizons to those outside the offerings of my regular supermarket.

I couldn't find it at first, so after getting the attention of a KaDeWe staff and asking "Können Sie mir sagen, wo der Käsebereich ist?" I found it. Oh, the smell just started getting stronger and stronger as I was approaching it. And when I finally found it, it was huge. It consisted of two large island counters full of cheese, as well as a wall counter. I guess I walked around those two island counters so many times before I decided on my selection for the day: a piece of Spanish Valdeon blue cheese, which costs 3,48 EUR per 100g.

I love the fact that they have full descriptions of all the cheese they sell, including country of origin, as well as fat content. This makes it easier for me to document it, as it is a little project of mine to not repeat a cheese purchase as much as possible, in order to try all the different varieties of cheese there is.

So there, I will be back, when I have the time. The selection in my supermarket is still enough to keep me busy, but it is always great to have some variety every now and then. 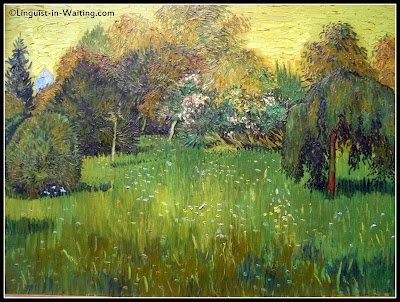 (Greenery, from my Art Institute of Chicago Series)