Personally, I suppose it was an interesting venue to see other people from my country, as well as to hear the language spoken again, as I don't have any Filipino friends who live in Berlin right now. Honestly, I think Filipino might be my first language, but English is the language in which I am more proficient with.

It was also interesting to know of other research opportunities here in Germany, as a representative from the DAAD (German Academic Exchange Service) was there to present how this funding source works.

But perhaps for the most part, most people there were just happy to see other folks from the Philippines, to feel that they were not alone. In fact, during the round table discussion, most of them discussed ways in which they can keep in touch with each other.

I suppose this is the part that I do not get. Granted, I have traveled more than the average Filipino. Perhaps that might be the reason, but when I was a foreign student in Buffalo, I never felt homesick or anything, I never felt the need to reach out and find friends from the Philippines. I just made friends, regardless of where they came from. After all, if the first thing you will seek upon landing into a foreign country is people from your own country, then why did you leave your own country in the first place? It's like eating in a Japanese restaurant if you're a Japanese tourist in London.

I have to say that the food was great. The ambassador's cook was very proficient in the trade, and so I loved eating adobo and pansit after a long hiatus. I also had interesting chats with quite a few people, including the Filipino Ambassador herself.

Anyway, I guess having a network of fellow countrymen in a foreign country is good, at least to alleviate the culture shock. However, the common thing I see with foreigners is that they rarely branch out and seek other friends outside their own little bubble of fellow countrymen. I have seen this in Buffalo before, where you see posses of Japanese and Korean and Chinese and Indian (just the four largest foreign student groups in Buffalo) students socializing with each other, and it just doesn't mix. Why go overseas and study, when you don't want to be immersed in the culture of your host country? 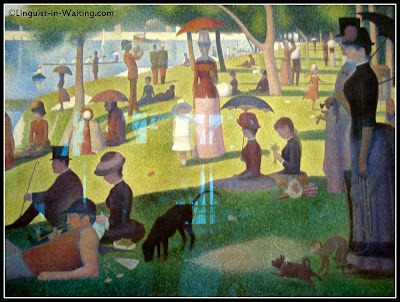 (Seurat, from my Art Institute of Chicago Series)