For the first time in 5 months, I went to the theatre. The last time I saw a play was back in the summer of last year, when I saw A Misdummer Night's Dream as a production of Shakespeare in Delaware Park. This time, I went ahead and bought myself a ticket for a production of Charles L. Mee's Big Love, performed in the English Theatre Berlin.

This play is a very anachronistic one; it is based on Aeschylus' 2500-year-old play The Suppliant Women, which tells the story of a large group of women fleeing a Greek island because they were being forcibly married to a large group of men. In this current play, Mee writes an anachronistic play, where a group of Greek women seek asylum in modern-day Italy.

The acting was rather spectacular. The play is very taxing, both to the actors and to the audience, as Mee apparently is known for writing plays that seem to be collages. In this one, emotions go back and forth fast; one scene is rather dramatic and emotional, while the immediately following scene is a comic one. At first, I did not understand the two scenes (one for the women, the other for the men), where they have group monologues, and they just shriek and exercise.

Anyway, at first, I hated the play. But then later on, I just realized that I hated some of the characters, and that is because these characters represented the set of values that I personally abhore, which is conservatism. At first, men are portrayed to be the enemies, the bad guys, and women are the victims. But I believe that Mee didn't write a play about female emancipation. Instead, Mee wrote this play to be something about liberalism and progressiveness. Even some of the women in the play were conservative. In effect, Mee wrote this play as a statement against radicalism, whether it's from the political right or left. In the end, the moral of the play is that one should live and let live.

It is obvious that I liked the play. After all, if I get to hate the character, that means that the production was good enough to engage me as an audience. So yes, I was glad that I bought a ticket. I am sure I'll be back in this theatre in the future. 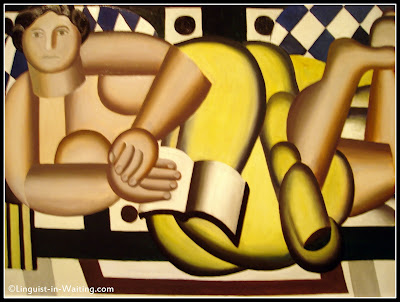 (Cubist Lady, from my Art Institute of Chicago Series)