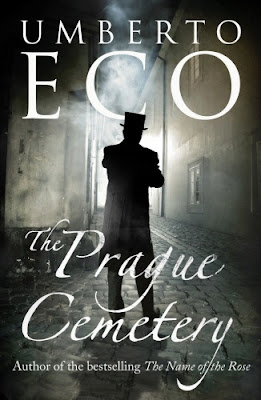 This is the third novel I have read that was written by the Italian novelist Umberto Eco. I first encountered Foucault's Pendulum back in 2005, and I read The Name of the Rose in 2007. Both books were detective-type old-age thrillers, that, although written in a professorial manner, still managed to get me captivated. I remember thinking that Umberto Eco is the thinking man's Dan Brown, and to some degree, that indeed is correct. Both books dealt with conspiracies and world domination, and this book, The Prague Cemetery, is no different. Eco here demonstrates his marvelous gift of historical fiction, and again, I am impressed by his research powers.

There is only one fictional character in this book, that is, the main character, Simone Simonini. He is Italian, and he hates everybody. He hates the Germans, he hates the French, he hates the Russians, and he hates the Jews. He is a forger; he has the nice ability of copying handwriting, and so he earns a living forging wills and testaments and so forth. He also enjoys good food. I later learned that Eco created this character to be the most hated character in fiction, and yes, I find it hard to sympathize with the main character. To this respect, Simonini is an anti-hero, and the reader follows the narrative, hoping that something bad will happen to him instead.

Everyone else is a real character, from Alexander Dumas to Sigmund Freud to Leo Taxil. And here is where Eco's genius lies in. Somehow, it is plausible, that this character, Simonini, is in fact responsible for all the accidents that happened in the past, from the death of Ippolito Nievo, to the Taxil hoax, to the Dreyfus Affair. Somehow, Eco managed to arrange things such that all these incidents in the 19th-century could be the works of just one person.

And that is what I think makes this book brilliant. Even though I hate the main character. I personally prefer Foucault's Pendulum more than The Prague Cemetery, but I have to say that this book seems to be more well-researched, and it takes a genius to find connections with these separate historical incidents and weave a fictional story to bind them all.

Perhaps one aspect of the book that I find disagreeable is the fact that the hatred and bigotry is just so explicit. Yes, I know that there is a historical context to this. I know that historically, Jews have been on the receiving end of hatred in Europe. Perhaps it just clashes with my sensibilities, but some of the parts of the novel I found hard to stomach, due to the fact that there are just paragraphs and paragraphs of overt racism, and it is hard to preface it with the historical context needed to fully understand it.

Overall, I give this book 4 out of 5 stars. It is a great intellectual read, and seriously intriguing if one has the proper curiosity for the topic. This is not easy reading, mind you, the main character is bipolar, so just imagine what that does to a diary entry. 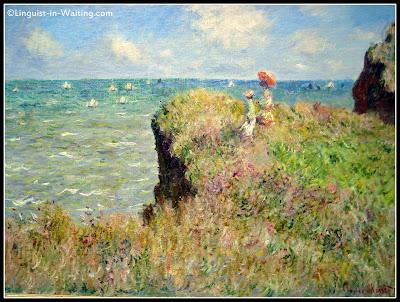 (Cliffs, from my Art Institute of Chicago Series)