Book Review: The Sorrows of an American by Siri Hustvedt 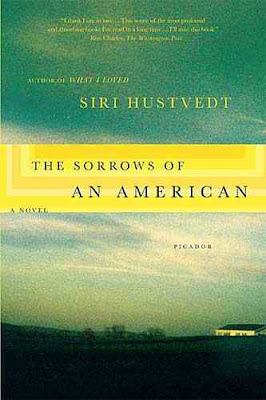 The Sorrows of an American is a multi-generational snapshot of the sorrows of four generations of Norwegian-Americans. The narrator is a phyciatrist, Erik Davidsen, who, together with his sister, Inga, a philosopher, buries their father, Lars, who recently died. The siblings live in New York City, yet the family ancestral home is in Minnesota. There are several sub-plots, which are too intricate to correctly narrate here, but basically it tells of the sorrows of four generations: Erik's; one below his (Inga's daughter, Sonia); one above him (his father's); and his grandfather's. In order to tell a story that operates on four different time lines, the narration is one superb feat.

Erik is a divorced man, his wife, Genie, left him. Now he is living in a Brooklyn brownstone, and rented out half of it to a single mom from Jamaica, Miranda. She has a daughter, Eglantine. The father is an artist, Jeffrey Lane, who has the habit of stalking people and taking their photos.

Inga is Erik's sister. She was married to a famous writer, Max Blaustein, who recently died. As he is famous, several people want a piece of him, including a reporter who wants to dig up dirt, as well as a biographer. Inga learns that Max was unfaithful to her, and fathered a son named Joel with a movie actress who acted in a movie where Max wrote the screenplay for.

Inga and Erik deal with their father's papers after he died. As Erik was reading his father's diary, he stumbles upon a secret, referring to a girl named Lisa, but nobody knew what the secret was. So Inga and Erik try to track down a Lisa in Minnesota, in order to find the secret.

I could go on and on, but I won't. The fact is, if I do, I wouldn't be doing justice to the book. After all, it takes a brilliant writer to be able to spin a tale as complicated as this. And somehow, I like that. As much as the novel was a page turner for me, it also was deeply engaging, and I didn't feel like I was reading an airport novel. Instead, I felt like I was reading a work of art, with countless hours of painstaking research needed in order to accomplish the world described in these pages.

I also like the fact that there is no very obvious climax. So pages have been turned, secrets have been revealed, but does it really bring catharsis? Not really. Perhaps it is a good mirror of how life is. Life isn't always a walk in the park. There are plenty of stressors that come to us left and right. But somehow we are able to fend them off. Somehow most of us still get out okay. But life is hard. And this book correctly illustrates that. Every character in this book is messed up. No one can be said to be fortunate, because every one has a defect, every one has a demon in their head, whether it is post-traumatic stress disorder, whether it is a stalker, whether it is unrequited love, every one has an emotional scar, and somehow that depicts how the world is, isn't it?

This is not chick-literature. It will not leave you feeling refreshed and smiling at the end. However, it is realism at its finest. The stories in this book are about real people, with real-world problems. Totally recommended. I give it 4 out of 5 stars. 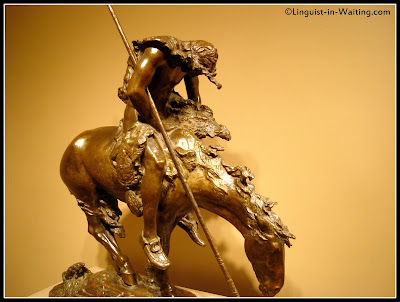 (Sculpture, from my Art Institute of Chicago Series)