During the weekends, when I do not set my alarm clock in the morning, sometimes I have very long elaborate dreams. Sometimes I wake up, and feel like I have just watched a very long movie. Recently, I have dreamed one such dream, and it was quite elaborate that I figured I'd record it down by blogging about it.

I dreamed that me and my family were living in a villa, it looked like southern Californian. There were at least two floors, and the upper floors were reached by a staircase in the large living room and foyer area. There are sliding windows that were quite open letting the sunlight inside, while allowing the people inside to gaze at the luscious plants that were growing in the garden.

I think it was a weekend, as it was already mid-morning, and yet everyone was still asleep. I on the other hand was already awake. I decided to walk around the house, quietly so as not to disturb anyone. While I was walking around, I discovered a switch on the wall. It was a very peculiar switch, as when one switches it on, a smelly dead monkfish slides across the floor of the living room, appearing from a trapdoor hidden in a corner. When one switches it off, the monkfish slides back to its hiding place. It's as if it is propelled by some magnetic mechanism under the floor, in order to allow it to move back and forth.

I decided to switch it on.

The first person to see it was my mother, who screamed and woke the entire house. Then I realized that we were not the only ones living there, but other families as well, even strangers. And as everyone started waking up, the tranquil house transformed into a hub of chaos.

Chaos only gives birth to further chaos, when someone gets an email saying the world is going to end soon, and forwards it to everyone. Soon enough, the population of the house decreases, one by one, as each person dies one way or another. It's like one gets a message that one's world is going to end in such and such a date and time, and then one dies at that point.

I myself got a message. It was whispered to me by a strange little girl I think, while I was getting water from the nearby well. The girl told me that I should find myself dancing at noon tomorrow, or else I would die. The bad thing is that I hated dancing. So in order to dance, I prepared a mixed tape of some dance music, put huge earphones on, drank a whole bottle of Riesling to get drunk, and danced away. Noon passed, I was still dancing, and I didn't die. At 13:00, I passed out.

So we went inside the car, and drove off, until the planet became so small and it finally vanished, effectively catapulting our car to float in outer space.

Then I woke up. 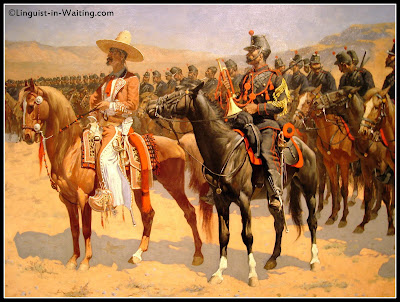 (Army, from my Art Institute of Chicago Series)